A man of many talents

Sparking innovation by…
creating a world that works for everyone 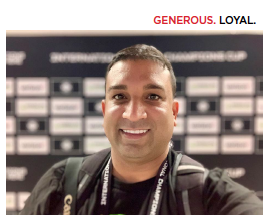 Ahsan Awan Awan has never met a challenge — nor an opportunity — he didn’t accept. His interests and talents are as varied as his considerable professional accomplishments. He has a law degree, an MBA in healthcare, a master’s in pharmacy/pharmacoeconomics, and a B.S. in political science and human development. He is also an entrepreneur, having founded several companies, as well as leading a team that created a new medical school in the United States. Ahsan bills himself as: a biopharma CRO exec turned pharma SCM exec, with some healthcare higher ed exec part of the mix, and now a clinical development and digital health exec, with middleware mobile and web tech expertise, not to mention he’s also a media wire exec, expert network KOL, and a SME. Additionally, he’s a consultant, contributor to InfoWorld, and a highly acclaimed sports photographer.

Currently, he is VP of clinical development and digital health, and lead medical science liaison at Genlantis Diagnostics, which designs, develops, and commercializes in vitro diagnostics and point-of-care tests.

From climate change to health pandemics to political and civil unrest — Ahsan is motivated by a desire to make a difference and to help save the planet and humanity. He is a visionary who will continue to shape and reshape the life-sciences industry for years to come.

PV: Your career has been multidimensional, and you have worn many hats. Tell me a little about your journey.

And this pertains to our industry. I enjoy aspects of regulatory management and oversight as much as I enjoy aspects of medical affairs and medical science liaison type work. I enjoy overseeing digital and eHealth/mHealth application development. And I enjoy traditional vendor management, vendor relations, vendor selection, and outsourcing clinical development activities too. They’re all fun. If you have a commitment to excellence, not only in what you’re doing but also in the totality of collaboration with a team, then you can find fun in new things.

My dad is a cardiologist and my mom is a physician as well; I grew up in a family full of doctors, medical school professors, and clinical researchers. My dad was the first university professor in the United States to break out and take clinical research into a private setting. Then, he created the multisite site management organization model. I remember as a kid back in the 1980s, going to meetings with him at PharmaNet, Quintiles, and Kendall and sitting in the room with Dennis Gillings and Candace Kendall talking about strategic development — all of which led up to the evolution and introduction of the commercial CRO model.

I feel like I literally grew up in this industry and saw the evolution of the CRO and central IRB for example. Toward the end of my time in high school, I began to assist with clinical study patients and saw firsthand what was happening from a clinical research coordinator perspective in cardiology trials.

I went off to college and a year after graduating I had an opportunity to do research at the University of Wisconsin School of Medicine under an NIH grant on HIV T-cell replication, which has proven to be important now. I got experience as a laboratory research assistant doing human in vitro research, which was pretty exciting.

At that point I was deciding whether to go to medical school or law school, and I chose law school. At one point, I wrote a business plan about how to transform clinical research operations by leveraging the Internet to digitize data and operational activities — everything from monitoring to administration of medication. It was a really big, detailed plan. The plan was amazingly similar to conversations being had now around decentralized clinical trials and operating models.

After graduating I dusted off the document and we put together a board of directors that included a group of senior people in the industry. We conducted our first global, completely electronic trial — no paper at all — in 2001-2002. The metrics were amazing. The speed with which we could scrub data, lock the database, complete the medical writing and then submit, and even draft presentations for industry, was incredible.

This was the precursor to what decentralized clinical trials are today.

By 2009, I needed a break from innovating and having a bit of a green thumb and a reverence for the planet, I went to work to create a system to change the way that we handle accountability around the way the industry managed investigational product inventory, so I reverse engineered a system to successfully reduce the amount of waste.

I found myself leaning toward technology and software with a bit of an e-health slant and crossed over into this world that I’m in now. I helped create a new company that will allow people to connect in ways they couldn’t before. That’s all I can tell you about this for now.

PV: With such a wide variety of interests and accomplishments, what do you count as your leadership strengths?

Awan: There are a few things that separate me. First, and foremost, I am a sponge for information and a student of history. I think it’s really important to understand the landscape and where we’ve come from, how we got to where we are, and constantly absorb information from new sources to understand where we are going. There’s nothing worse than running blind as a leader. If you don’t know what’s happening, your people can’t trust you, they can’t rely on you, and they won’t look to you. They won’t listen for your leadership to steer them because you don’t know what’s happening.

In addition, I think it’s critically important to delegate. I’ve learned over time how to build teams for efficient teamwork. All of my teams know I’m here to promote them and build them up, and I encourage them to take on new things and new challenges.

And finally, I learned how to build my inner circle and bring my trusted contacts with me, and invite my friends — my close contacts — into what I’m doing. A lot of times, people try to keep their lives separate. They want to keep their personal relationships, friendships, and people they’ve known for years out of their work environment. I’ve learned to do just the opposite. If you’re willing to trust people to be in your home or make time to go out and have dinner with them, then these are the people who you want to work with — you communicate well, you work well together, and you’ll hold each other to high standards.

PV: As a futurist and a visionary, what’s the next big thing you’re tracking?

PV: While it’s obvious your career journey is nowhere near the end, what would you like your legacy to be?

Awan: Some ancient wise sage said at some point that the measure of a person is rooted in how they’re remembered by those who don’t know them. So it’s not so much that someone I know remembers me, but it’s the extent to which they’re inspired to share with others what they know about me, and that inspires the next generation to do something as a result. I would like people to know that it’s a diverse world and a diverse industry, and there are a lot of things to do. There are a lot of opportunities out there, and don’t resist any of it — just take it all on. Try your hand at every bit of it. Being in a silo is not a great experience. Being in a vacuum is not a healthy place to be. And I learned that in 2009, which is why I stepped away. In 2011 when I landed on back on the PharmaVOICE 100 again, it was because of creating a medical school. And then last year because of the work I was doing at Genlantis. I see so many folks who are afraid to take a wrong turn once in a while, and therefore they can never quite get past where they are.

There’s something more for me. I want to help people bring really great products and ideas to market because I know how to do that. There are all kinds of innovative solutions on the horizon — new drugs, new vaccines, new technologies. I believe we’re at the beginning of a medication healthcare transformation. And over the next three years, we’re going to see this evolve in ways that many people would have never thought possible.

We’re going to see the emergence of products 20 years in the making, but at small benchtop levels. RNA research, RNAi, mRNA, and other sub-molecular/sub-cellular therapies, targeted therapeutics, and personalized medicine are going to move forward by leaps and bounds now that commercialization is possible.

So going forward, what’s next for me? I want to collaborate further and to produce more extraordinary results. And I don’t know exactly what those are or where they are going to land, but I’m excited for the journey. (PV)