Industry Gears Up For Track and Trace

Counterfeit medicines have taken a huge toll, both in terms of human costs as well as financially. Interpol estimates that 1 million deaths each year can be linked to counterfeits. According to PwC, counterfeit pharmaceuticals are a $200 billion-plus annual business.

The problem is most severe in lower income countries with between 10% and 30% of drugs sold being deemed fake, the Centers for Disease Control and Prevention says. PwC reports the figures for counterfeits can be as high as 70% in some developing regions, such as Africa. In developed economies that figure is around 1%.

There is commitment globally to tackle the problem, from World Health Organization (WHO) 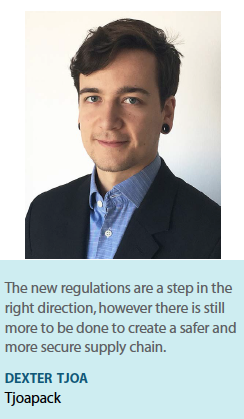 activities to the scale up of track-and-trace regulations to the development of high-tech tools by vendors and pharma companies to address the fake medicine epidemic.

In 2013, WHO launched a global surveillance and monitoring program to encourage member states to report incidents of substandard and falsified (SF) medical products. If a medical product is assessed as SF and is high risk, or there is evidence the product has been falsified, the WHO will consider issuing a medical rapid alert to warn member states and the public about such products.

Countries across the globe have established or are preparing to put in place track-and-trace solutions to tackle SF products.

“Turkey, South Korea, Saudi Arabia, and China have track-and-trace regulations in place, and these countries are leading the industry with their anti-counterfeiting efforts," says Staffan Widengren, director corporate projects, Recipharm.

Brazil is conducting a pilot on its serialization and tracing law. According to Shabbir Dahod, president and CEO of TraceLink, the country is about 18 months away from kicking off its serialization effort in earnest.

In the United States, the Drug Supply Chain Security Act (DSCSA) outlines steps to build an electronic, interoperable system to identify and trace certain prescription drugs as they are distributed in the country. The FDA has delayed active enforcement until November 2018 in response to concerns that many in the industry would be unable to meet the 2017 deadline, Mr. Widengren says.

The EU Falsified Medicines Directive (FMD) will come into force in February 2019. Both the U.S. and EU regulations will require application of 2D matrix barcodes — as well as tamper evidence in the case of the FMD — on every saleable unit of drug product, so that it can be identified and verified throughout the supply chain (DSCSA) and at the point of dispensing to patients (FMD), Mr. Widengren adds.

Dexter Tjoa, director of corporate strategy for Tjoapack, says while the new regulations are a step in the right direction, more needs to be done to create a safer and more secure supply chain, adding that the delay to enforcement of the DSCSA reflects the lack of preparedness across the industry.

“There are a number of countries where serialization regulations are already in force and with the next deadlines looming closer, it’s vital that companies are proactive in their preparations to ensure full compliance when the remaining mandates come into force," Mr. Tjoa says.

Mr. Dahod says the European hub, which is what all manufacturers need to connect to, is up and running.

“The local and national systems are being implemented, vendors have been selected, companies are building their verifications solutions for pharmacies and wholesalers who need to use the national hub," he says.

Mr. Widengren believes a more globally aligned strategy to combat counterfeiting would be beneficial, but with the varying regulations in different markets, the industry is some way from achieving this.

Other initiatives aimed at combatting fake medicines include the Partnership for Safe Medicines (PSM), which is a public health group committed to the safety of prescription drugs and protecting consumers against counterfeit, substandard or otherwise unsafe medicines.

The organization works with patient advocacy and consumer groups to raise awareness about counterfeits and to help patients and healthcare professionals buy medication safely and affordably.

Mr. Tjoa says while the regulations are fairly recent developments, the concept of serialization has been around for many years. Yet despite the obvious benefits when it comes to preventing counterfeit medicines from entering the supply chain, the industry has been very slow to adopt it.

“Even after the regulations were announced, few companies have recognized the urgency and scale of implementation," he says. “The delay in preparing for serialization has been caused by a number of factors, including the upfront costs associated with hardware, software, data management systems, and staff training, which for many smaller players are simply not feasible."

However, Mr. Dahod says in the United States so far, more than two-thirds of the industry has already selected a vendor and is in the process of serializing.

Mr. Widengren says contract manufacturers will play a vital role in helping the industry to ensure continuity of supply after the regulatory deadlines, but to do so they must have a clearly defined strategy and timeline in place for implementation.

One company that is tackling counterfeiting head on with tool development is Pfizer. One tool is the videometer, which checks the color spectrum of the packaging to detect irregularities, providing a starting point to determine potential sources.

To test the product itself, scientists from Pfizer Global Supply Chain use a handheld Raman spectrometer to assess whether the product is fake or genuine. 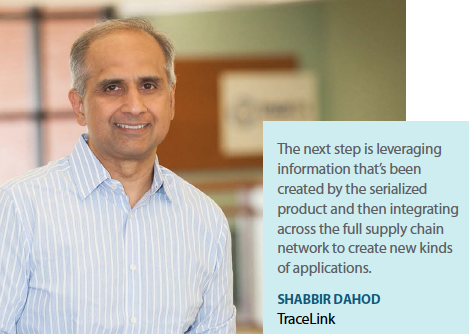 Other tools being deployed are infrared spectroscopy and powder X-ray diffraction to further analyze samples.

Several packaging companies have focused on enhanced track and trace facilities. Tjoapack was the first company in Europe to put barcodes on unit doses and has campaigned for a safer supply chain for patients.

“For example, in 2007, we participated in an EU track-and-trace research project, involving the use of data matrix codes and RFID tags on packaging throughout Europe," Mr. Tjoa says. “We felt that the process was still missing one important step: the serialization of each individual pocket on the blister. This step would mean that track and trace could be used right up to the tablet level, eliminating the risk of counterfeited blisters, and also making standard patient packaging suitable for use as a unit dose in hospitals: an efficiency improvement in packaging at the patient level. In 2008, we became the first company to perform full serialization and aggregation on a packaging line from blister to pallet."

Contract manufacturers are on the front line and are adopting strategies.

For example, Recipharm has invested in equipping its facilities with the latest technologies and has a dedicated taskforce to manage the implementation and focus on understanding and keeping up to date with the evolving market requirements.

“Companies are producing thousands to multiple billions of products every year and so the exchange of information between contract manufacturers and pharmaceutical companies and the exchange with the government systems or trading partners downstream is complex," he says. “Many companies are putting in information management systems that can manage across their supply network, both internal and external."

In addition, companies have set up specific SOPs and processes in response to regulatory requirements that manufacturing and warehouse operations need to follow. Additionally, they train individuals who are implementing those processes to make sure that they’re capturing serial numbers and then properly dealing with exception handling, such as returns and lost products.

“For example, we’ve established a set of SOPs that range from the shop floor level, all the way up through to the reporting level where manufacturers have to exchange information either with their supply chain partners or with regulators," Mr. Dahod says.

Combatting counterfeiting in the supply chain using both serialization and aggregation requires engagement and investment from all stakeholders, Mr. Widengren says, adding that currently there are too many companies not devoting sufficient attention to this challenge.

Mr. Dahod says the industry is moving forward, but the big challenges will be meeting the regulations in time and having the processes in place, as well as the cost involved.

“The next step is leveraging information that’s been created by the serialized product and then integrating across the full supply chain network to create new kinds of applications," he says. “Initially there’s a lot of value in just preventing counterfeiting because of the protections, but there’s opportunities to do even greater things such as having more effective recalls and better information exchange."

According to Mr. Tjoa, access to an increased amount of data will allow companies to better control their logistics operations and avoid unwanted trade routes, as well as improve order forecasting thanks to more accurate stock level data.

“More accurate order forecasting will also help to reduce the amount of waste product across the industry, which in theory should save billions," he says.

Mr. Dahod adds that if companies have an end-to-end digital supply chain, they can leverage that to exchange more real-time information to handle issues such as shortages or to improve the quality of product.

“In the future, we could leverage the end-to-end digital supply chain for new types of therapies, such as gene therapy solutions," Mr. Dahod says. “Companies would be able to dramatically improve the safety, the security, and the availability of drug products, and eventually drive much better outcomes for patients."

Mr. Widengren concurs, adding that greater efficiencies and better supply chain processes will allow the industry to deliver vital medicines to patients faster and at a reduced cost.(PV)

The WHO estimates that 50% of drugs for sale on the Internet are fake
Up to 50,000 online pharmacies are in operation, about 95% of which don’t comply with the laws and industry standards created to protect patients
90% of drugs purchased online come from a different country than the website claims
In 2013, the FDA identified and shut down more than 13,000 websites hosted by illegal online pharmacies

The Global Threat From Counterfeits

1% to 30% of drugs in circulation are fake, with developing countries more affected than developed countries
1 million patients die annually from toxic counterfeit pharmaceuticals
450,000 preventable malaria deaths each year are caused by counterfeit pills
4 million tablets were confiscated in 2015 by German customs

View all | Post a press release
Industry Dive publications win 6 National Gold Azbees – most of any publisher
From Industry Dive
Azzur Group Celebrates Ground-Breaking of Raleigh Cleanrooms on Demand™ Facility
From Azzur Group
Vivera Partners with NINDS of NIH to Identify Potential Stuttering Treatments
From Vivera Pharmaceuticals, Inc.
Azzur Group Appoints Corporate Services Executive, Ray Jaffe, as Vice President of Operations,…
From Azzur Group
Read next
Latest in Commercialization
© 2022 Industry Dive. All rights reserved. | View our other publications | Privacy policy | Terms of use | Take down policy.
We use cookies to optimize your experience on our website and for analytics and advertising purposes. By continuing to use our site, you agree to our cookie policy. Learn more
Accept