What do Pokemon Go, Zombies, Run!, and Excedrin have in common? They are all using augmented or virtual reality to motivate consumers to be more active, or in the case of Excedrin, to be more compassionate. Earlier this year, Excedrin launched the world’s first augmented reality (AR) migraine simulator, with the aim to provide a new level of understanding 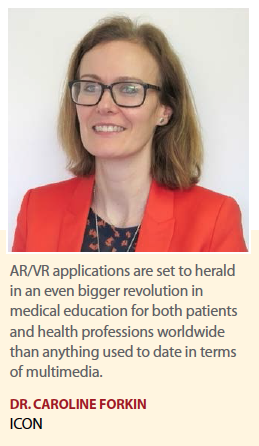 around migraines. The Migraine Experience is designed to give non-sufferers the chance to safely experience symptoms of a migraine, including disorientation, aura, sensitivity to light, and blurred vision. By using AR reality, a non-sufferer experiences every day migraine symptoms and the scenarios that migraine suffers have to manage through. As one of the first brands to leverage AR technology to conceptualize a health condition, Excedrin is demonstrating just how effective virtual reality (VR) can be in patient education. Huffington Post reported that the video received more than 2 million Youtube views and over 92,000 shares on its site in just two months.

Used as a marketing tool, VR technology can build empathy, facilitate training on medical devices, and create immersive demos that illustrate mechanisms of action with extreme clarity. AR and VR have the potential to change the world of healthcare in all aspects; from patient education, to aiding surgeons during procedures, and even provide effective marketing tools.

Already VR is on the brink of changing patient care on several fronts. Medical education — in medical schools and in a clinician’s daily practice — is being revolutionized through simulation systems that keep patients safe while exposing medical practitioners to real-world situations. Several major healthcare systems have adopted simulation systems as teaching and learning tools; the Center for Virtual Care at the UC Davis School of Medicine and the Penn State Health Simulation Center are two examples.

Caroline Forkin, M.D., senior director, medical affairs, ICON, believes AR/VR applications are set to herald in an even bigger revolution in medical education for both patients and health professions worldwide than anything used to date in terms of multimedia.

“In the realm of interactive simulation, AR/VR has a broad application in clinical practice," Dr. Forkin says. “The idea of having a user or patient interact and explore with instant response and feedback is a key to learning and AR/VR is no 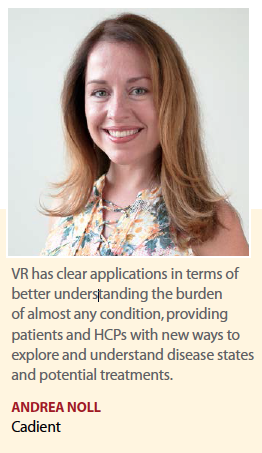 different. Its key benefit of having six degrees of freedom is just that, the ability to explore and interact with a 360-degree interactive video or complete a task in a simulated 3D-simulated environment, such as a doctor’s surgery, emergency room, etc.

VR technology is incredibly engaging and, more importantly, the potential to interact with patients and influence behavior by delivering deeply relevant content in a vivid new format is undeniable, says Erin Fitzgerald, VP, marketing, AccentHealth. “In fact, data show 96% of physicians agree that VR engagement can be more valuable than websites and other clinical tools used for patient education. In 2017, as healthcare marketers concentrate on delivering immersive, individualized patient experiences, we expect that VR will take hold at the point of care. Anatomical models are already being integrated into exam room tablets and, before long, therapeutic and behavioral visualizations will be standard educational tools for patients throughout the medical journey."

Andrea Noll, senior manager, creative development, at Cadient, a Cognizant company, notes that in terms of health education, VR has clear applications in terms of better understanding the burden of almost any condition, providing patients and HCPs with entirely new ways to explore and understand disease states and potential treatments.

“There are technologies available in the market that can replicate common migraine symptoms to providing an experience and insight into what a schizophrenic patient might feel during a real-life situation," she says. “There are also VR gaming apps such as Snow World, that are already proving effective for reducing pain in burn victims. In addition, amputees experiencing phantom limb pain have reported a significant decrease in pain by using an experimental treatment in which signals from a limb stump control a virtual reality limb. These types of experiences, which provide a level of distraction and technology well beyond traditional treatments, could be a viable alternative to other forms of pain relief."

VR in the Future 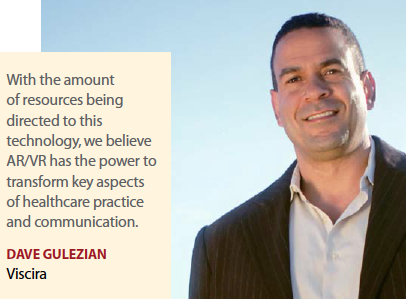 The accelerating adoption of AR and VR will continue to capture the attention of our industry. But Brent Turner, senior VP, solutions, at Cramer sees AR and VR slated for different trajectories in 2017.

“In 2017, VR will take the lead and garner the most focus from healthcare businesses," he says. “This is because VR is on the cusp of mass consumer adoption. From ubiquitous smartphones to low-cost headsets, for example Google’s new Daydream and Playstation’s new VR headset, the technology for VR is now widely available. Plus, with massive companies such as Facebook, YouTube, and NBC pushing VR-based initiatives to their audiences, the content is becoming highly desirable. Together, in 2017, this will push VR into the daily lives of the mass population.

“Yet, it is AR that will have the bigger impact on our businesses," he continues. “By its very nature — opening you to an augmented view of your own reality vs. closing you into an isolated virtual reality — AR will transform how we interact with the world around us.
However, the technology in this space is still exclusive, for example  Microsoft’s HoloLens or Meta and Magic Leap, which are coming soon."

In 2017, these paths to adoption now guide how healthcare businesses should invest in AR and VR. 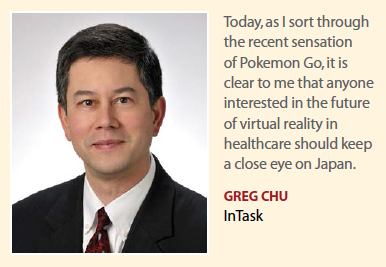 renderings of patients’ organs. For institution-centric businesses, 2017 VR investments could focus on marketing materials, product demos, and sales enablement. While long-term AR investments could include services such as AR maintenance."

Ms. Noll agrees that both AR and VR will become more commonplace in many aspects of healthcare as adoption increases and applications become more robust.

“HCPs will be able to accurately simulate surgical procedures and outcomes, before ever opening a patient up," she says. “Once they do, virtual headsets will deliver patient data seamlessly into their field of vision. Patients too, will be able to simulate hospital stays and procedures before they occur, and will be able to understand their disease conditions in ways never before possible."

Furthermore, as home monitoring and sensors proliferate, VR coaches and immersive data feedback will help accelerate healing and recovery at home. Integration of VR with other technologies is sure to yield a wide range of potential applications that will change the way the industry cares for patients along every point of the care continuum.

Multiple industry reports have predicted that within 10 years AR and VR could produce revenue in the tens of billions of dollars as the potential application of AR and VR goes far beyond gaming and entertainment, Dave Gulezian, president and CEO of Viscira, adds that there are many different uses for the technology within healthcare, and we are just scratching the surface of its potential.

“We believe AR/VR has the power to transform key aspects of healthcare practice and communication," he says. “It is already impacting the way medical professionals are trained, and the way physicians are able to diagnose and treat

patients. Just last year, a team of surgeons used Google Cardboard to map out a surgical repair of a baby’s heart, which ultimately saved her life. And, today, a virtual surgery simulator known as NeuroTouch is being used to rehearse and simulate complicated surgical procedures before the actual surgery is performed."

At present, experts say we are in the steepest part of an industry adoption curve when it comes to AR/VR.

“Innovation often comes in waves, and we’re seeing lots of investment, research and development, and new entrants into the AR/VR space with new hardware and software solutions," Mr. Gulezian says. “At Viscira, we are constantly investigating and prototyping various AR and VR programs that leverage myriad devices from Google Cardboard to Oculus Rift, and from Samsung Gear to Microsoft HoloLens."

Greg Chu, chief operating officer at InTask, recalls sitting next to a pair of hospital administrators from Osaka, Japan, a few years back at a session of the Games for Change conference in New York City. The administrators were there to learn how gamification could improve their hospital operations.

“Today, as I sort through the recent sensation of Pokemon Go, it is clear to me that anyone interested in the future of VR reality in healthcare should keep a close eye on Japan," he says. “Building on a strong technological base and consumer market for games, Japanese companies have been making significant investment in VR. The fruits of this investment are rapidly crossing over into healthcare."

For instance, Mr. Chu cites the example of a team at the University of Tokyo Hospital that recently announced progress in treating phantom limb pain with VR technology.

Amputees who are able to “see and move" their missing limbs through VR demonstrated a reduction in pain through this novel treatment.

“Reliance on virtual reality or non-human healthcare support for the elderly and ill may never go mainstream — in Japan or elsewhere — but the confluence of virtual reality and robotics in Japan promise innovations in mixed reality healthcare solutions that may one day provide cost-effective answers to the healthcare needs of multiple societies," Mr. Chu says.

Healthcare needs go beyond the clinical, it’s also important to make sure there is patient engagement in order to improve outcomes.

Drew Griffin, senior technical architect at Razorfish Health, says in the endeavor to increase effective communication between patients and their PCPs, technology solutions are increasingly being employed to impart a visual perspective relative to a patient’s condition.

“Consider medication adherence," he says. “Using a traffic signal as a metaphor, its red, yellow, and green colors are immediately more telling than simply informing a patient he or she is 50% adherent for the day. VR/AR is increasingly 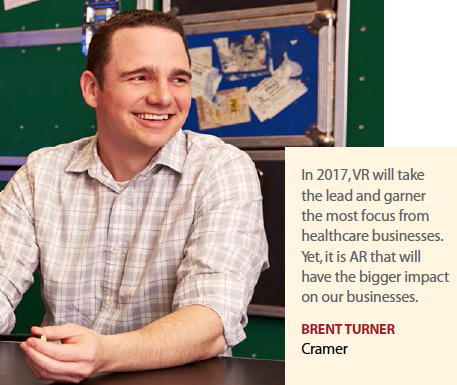 being used to extend this visual metaphor. One specific application involves overlaying additional real-time data on top of a scene being captured by a camera in a user’s mobile device — phone, smart eyewear, watch, etc."

Mr. Griffin cites an example his agency has been exploring that involves using AR to provide visual cues to diabetic patients about how their disease affects the body.

“Telling a Type 2 diabetes patient that the pancreas is responsible for producing insulin and then discussing in-depth a cell’s insulin resistance may not leave a lasting impression," he explains. “However, by pointing a camera at the pancreas on a physical wall-chart of the human body, AR software displays a pop-up animation of the pancreas producing insulin and the cell’s uptake of it. This allows patients to visualize their condition in ways never before possible and provides a catalyst for focused conversation with their PCP."

VR could also be used by a patient facing upcoming eye surgery to obtain information about various medical implements used in the procedure.

“Given that patient-HCP communications can be quantitatively dense, any technology such as VR/AR that can provide just-in-time, easy-to-digest context-sensitive data will be an unprecedented and invaluable tool to educate patients during the diagnoses and treatment of their conditions," Mr. Griffin concludes. “These technologies also bring information about their bodies and interactions with medicine or procedures, which allows patients to allow to quickly grasp complex medical and treatment topics." (PV)