Venezuela: Finding Opportunities Among the Challenges

Venezuela, officially known as the Bolivarian Republic of Venezuela, is one of the most urbanized countries in South America. The vast majority of its population — about 30 million people — live in cities in the north, particularly in the capital Caracas. 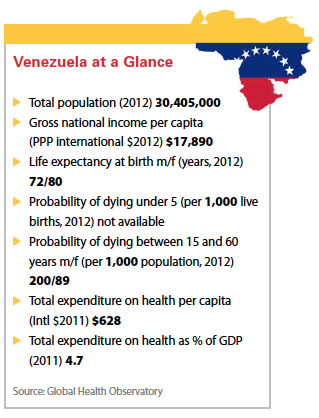 prices, and political problems have led to a sharp economic decline in the country. Challenges facing companies doing business in the country include price controls, high inflation, currency devaluation, import and foreign currency controls, and government attitudes to standard business practices, according to Business Monitor International.

Takeda entered the Venezuela market in 2008, originally as Nycomed Venezuela. The company focuses on therapeutic areas such as gastroenterology, respiratory, pain, and calcium/vitamin D. Takeda notes that new therapeutic areas in its portfolio — metabolic, oncology, cardiovascular, central nervous system,  and immunology products — will allow it to increase its presence in Venezuela.

Many large companies remain wary of the market, with one large global clinical research organization noting that it does not do business in the country because of regulatory uncertainties.

One significant challenge the country has faced is medicine shortages in pharmacies and medical centers. Last July, the president of the Venezuelan Pharmaceutical Federation, Freddy Ceballos warned of a 60% shortfall in medicines and urged the government to act immediately.

The Pharmaceutical Industry Chamber, which represents 31 importers and producers of medicines in Venezuela, on the other hand stated the situation was improving. 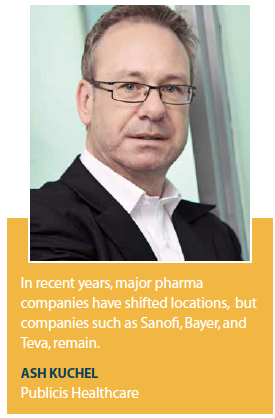 One step the government has taken to address shortages has been to sign cooperative agreements with Uruguay and Argentina to import high-demand medicines into Venezuela beginning earlier this year, Mr. Kuchel says.

According to a Pharma and Healthcare Insight report, in 2013, Venezuela’s top five pharmaceutical import partners included Germany, the United States, Mexico, Brazil, and Cuba. Uruguay, Argentina, Colombia, and Panama were among the top 15 import partners. In 2013, the total value of imported pharmaceutical goods into Venezuela came to US $3.6  billion, which was expected to rise to US $6.3 billion in 2014, and then fall slightly to US $5.4 billion in 2018.

“For marketers, the medicine shortages means they have an opportunity to capitalize on the more recent demand for and curiosity about brands and increased focus on preventive medicine," Mr. Kuchel comments.

“There will also be an increased focus on preventive medicine and training for medical staff," he says.

Analysts at MarketResearch.com say Venezuela’s improving foreign currency supply, increasing pharmaceutical imports from political allies, and the potential expansion of free medicine coverage in the public sector will ease the shortage of local medicines in the near term.  (PV)

View all | Post a press release
Industry Dive publications win 6 National Gold Azbees – most of any publisher
From Industry Dive
Azzur Group Celebrates Ground-Breaking of Raleigh Cleanrooms on Demand™ Facility
From Azzur Group
Azzur Group Appoints Corporate Services Executive, Ray Jaffe, as Vice President of Operations,…
From Azzur Group
Vivera Partners with NINDS of NIH to Identify Potential Stuttering Treatments
From Vivera Pharmaceuticals, Inc.
Read next
Latest in Commercialization
© 2022 Industry Dive. All rights reserved. | View our other publications | Privacy policy | Terms of use | Take down policy.
We use cookies to optimize your experience on our website and for analytics and advertising purposes. By continuing to use our site, you agree to our cookie policy. Learn more
Accept