Payer Perspectives on PROs: Now and in the Future 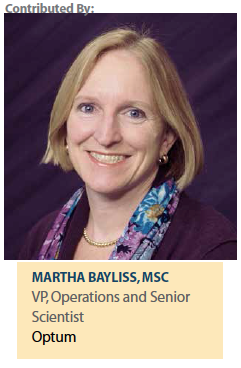 That’s what we said to a cross-section of health care payers to gauge how they felt about using evidence from patient reported outcome surveys (PROs) when making coverage decisions for pharmaceuticals. The input we received during our in-depth conversations provided valuable insights on what payers think about PRO evidence, how they see it being used in the years to come, and what pharmaceutical companies should be doing about it. Their answers also dispelled some common myths on the subject.

To obtain input from individuals with varied viewpoints, we conducted one hour, double blind telephone interviews with a diverse group of payer executives. Optum was not identified as a purveyor of PRO products and services during the survey interviews. 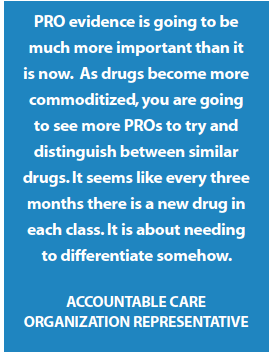 What We Found: Overall

The chart shows the overall results from the survey. While the respondents felt the relevance of PRO evidence was on the low side when surveyed, they certainly didn’t think it was going to stay that way. Their ratings predict a 70% jump in relevance between the survey date and five years later. That point of view may very well be spurred by a changing health care environment created by the Affordable Care Act in which payment is being linked to achieving quality standards.

Looking at the second pair of questions, the payers expressed an interest in getting more PRO data right away, and their ratings indicate their interest is only going to get stronger in the coming years. The payers’ responses tell a similar story about how they feel about the value of pharma companies investing in PROs.

What We Found: By Payer

When we looked at the ratings of the respondents individually, we found that not all payers have the same opinions about the value of PROs for making coverage decisions about new drugs. PROs seem to have greater relevance for payers who have long-term responsibility for their population, like ACOs, the VA and self-insured employers. Relevance also seems to rise along with the amount of financial risk the organization assumes.

What We Found: By Disease Type 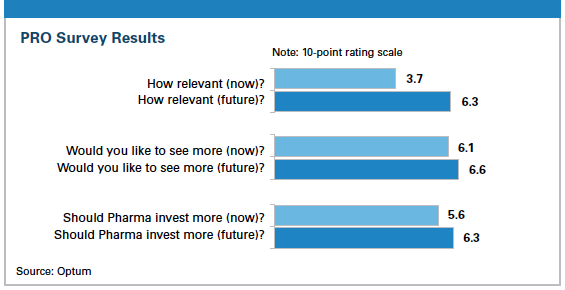 Now, about those myths we referred to earlier. As we spoke to the executives, we heard some interesting things that upended three common beliefs regarding PROs and their usage along the pharma developmental timeline.

The first myth that was busted is that U.S. payers don’t care about PROs. It’s clear to us from our discussions that some payers are very attentive to PRO data and, in fact, want more of it.

The second myth is that PRO evidence is only important if it’s on the product label. While PRO-based labels are extremely valuable for product promotion, payers told us they will consider PRO results from pivotal studies whether or not the results are featured on the label.

And, finally, there is the common belief that it’s OK to put off PRO data collection until late phase studies. What we heard is that the best approach for pharma companies is to collect and interpret the data in the pivotal studies since initial coverage decisions are based on those studies. PRO data from late phase studies isn’t considered.

What It All Means

When creating a PRO strategy, it’s critical to keep payers in mind, especially those with a long-term view and more financial risk. That means gathering the kind of evidence they want to see and presenting it in a way they want to see it. For example, it’s important to use PROs to underscore the relationship between self-rated health and future medical costs. It’s also helpful to use standardized PROs that allow for a straightforward interpretation and direct comparisons.

During this enlightening exercise, we learned that payers value PRO evidence as a unique predictor of clinical and economic outcomes, and as a key element of performance and quality ratings. We also learned that payers need to be educated about how PRO tools work and how the data those tools produce can be used to make patient access and intervention decisions. For pharmaceutical companies, these realizations represent an opportunity to substantially improve the chances for product acceptance and marketing success by meeting the key data needs of payer decision makers.(PV)