Instagram began offering verified badges for brands at the end of 2014. The badges are designed to make it easier for people to identify and follow the authentic brands they care about. Instagram has also added branded video ads to its advertising base.

Eileen O’Brien of Twist Mktg blogs that Boehringer-Ingelheim was the first pharmaceutical company to start its own Instagram account in September 2013, using it to feature photos of its history, including logos, early factories, and medications on #ThrowbackThursday. Lilly set up an Instagram account in February 2014 and also features old photos of buildings and researchers of the past along side current staff and research efforts.

Disease state support groups are prolific users of Instagram, most posting images featuring tips and encouragement for people living with the associated disease.

Marketing experts note if pharma companies are not interested in the public relations aspect of Instagram for building brand image or corporate reputation, they may want to at least investigate the disease state groups as a place to post disease awareness materials.

Video Consumption Grows, But Not on Mobile 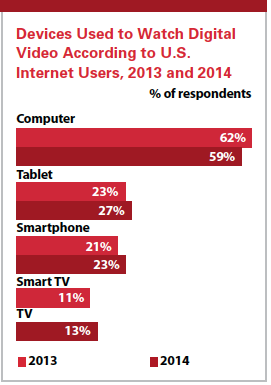 The U.S. audience for digital video — that is, video consumed on any digital device — will pass 200 million in 2015, making up not quite two-thirds of the entire population, according to a new eMarketer report, “US Digital Video Audience Profile: Who’s Watching, How They’re Watching and What Screens They’re Watching." It’s a large audience, but one that is not likely to increase much further. eMarketer estimates that growth will run in the low single digits over the next few years. The most common screen for digital video consumption is still the traditional desktop or laptop. Many digital video viewers use multiple screens over time (and even simultaneously), but computers remain the most popular access point. Although there are fewer tablet users than smartphone users, the size of the U.S. tablet video-viewing audience is nearly as large as that of the smartphone video-viewing audience, reflecting the fact that the tablet is associated with leisure-time activities, such as content consumption.

The consumer-friendly Web portal combines and simplifies information from hundreds of sources and acts as a navigator to funnel patients to the information they need.

While the site’s current focus is on the Exchange Marketplace, PatientsandtheACA.com provides information for Medicaid, Medicare, employer-based, private insurance, and Medicaid/Medicare dual eligible patients who are also enrolling in coverage during and beyond the Exchange Marketplace enrollment period. Pharmspective is seeking sponsors to help it expand outreach to consumers.

Three-year-old Doximity, a professional network for physicians, has more than 50% of all U.S. doctors in its network. After doubling in size in 2013, Doximity’s growth accelerated in 2014 to more than 400,000 members, making it the largest secure network of doctors ever created and the profession’s most rapidly adopted new technology — other than the iPhone.

Since its launch in 2011, Doximity has provided a platform for physicians to connect, collaborate, and collectively provide better care for their patients. Doximity is already seeing member engagement exceeding that of general professional networks, for example LinkedIn. To date, physicians have made 21.2 million professional connections on Doximity, averaging 53 colleagues per member.

EMD Serono has serialized all of its major brands in the United States and launched a smartphone application, Check My Meds, which enables patients to verify their products by scanning the serial number on each package. This new serialization initiative builds on the company’s track record of product integrity. The launch precedes requirements set forth in new legislation from the U.S. FDA. Although EMD Serono’s exposure to counterfeiting has been limited, the company is taking proactive steps to ensure it stays that way.

Counterfeit medicines are an increasing problem in industrialized countries such as the United States, affecting about 38 million prescriptions each year. In addition to counterfeiting problems that have affected primary care medicines, there have been recent high-profile cases targeting low-volume, specialty care medicines, including biologics, largely in therapies for cancer.

As part of the 2013 Drug Quality and Security Act, the FDA has mandated that by January 2015, all U.S. pharmaceutical product manufacturers capture the transaction history and lot level movement of pharmaceutical products through the supply chain and store the information for at least six years. By November 2017, that information must be available electronically, and the serial number must be affixed or imprinted on the label at the unit level.

Through the Check My Meds initiative, all major EMD Serono medicines, including therapies for multiple sclerosis (MS), infertility, growth disorders, and HIV-associated wasting, will have a unique and randomized serial number that is printed on each package.

The Check My Meds app allows patients to check this serial number to validate the authenticity of their medication, and also easily link to mobile sites for EMD Serono’s patient-support and access programs, including MS LifeLines and Fertility Lifelines. 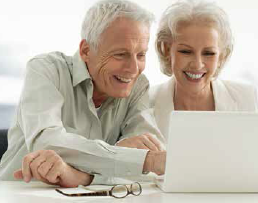 As more than 75 million baby boomers prepare to retire in the next decade, pharma can plan on increasing adherence among them through remote patient monitoring devices.

According to a report by Kalorama Information, aging boomers will not only require but also desire wireless technologies to monitor their health conditions, as they prefer to stay in their homes rather than move to a healthcare facility. Boomers are mobile, technology savvy, and interested in their health.

This group is ideal for self-monitoring conditions and tracking their progress in conjunction with their healthcare providers. Patient monitoring systems with advanced capabilities are among the fastest-growing devices in terms of revenue growth. The $29 billion market will grow at a rate of 9% for the next four years.

Aging of the population has several consequences, according to the report.  While the prevalence of chronic diseases increases, the percentage of persons in the workforce decreases, leaving fewer healthcare personnel to care for more sick populations.

In addition, in the United States, the healthcare system must find ways to reduce costs because a larger percentage of elderly Americans will be drawing Social Security, rather than contributing to the economy.  This is similar in world economies. 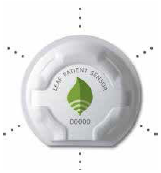 Chino Valley Medical Center now requires the use of a wireless monitoring system for at-risk patients to prevent pressure ulcers. The acute care facility in California will require that all patients who score 18 or lower on the Braden Scale for Predicting Pressure Ulcer Risk wear a Leaf Patient Sensor to help nursing staff follow protocols needed to prevent the formation of pressure ulcers on those patients.

The lightweight, wireless sensor tracks patient movements and notifies clinicians when patients must be turned to relieve pressure that can lead to bedsores or pressure ulcers.

Clinical trials have shown that the wearable patient sensor can help medical professionals dramatically improve their efforts to prevent the occurrence of pressure ulcers.

One study presented at last month’s American Nurses Credential Center (ANCC) National Magnet Conference showed that using the device increased compliance with hospital turn protocols ?— ?a standard of care to prevent pressure ulcers? —? from a baseline of 64% at the start of the trial to 98% after the monitoring system was deployed.

The Leaf system is comprised of a small, lightweight, wearable sensor that electronically monitors a patient’s position and movements.

Data collected by the sensor is communicated wirelessly to central monitoring stations or mobile devices so that caregivers can check on patient position.

Focus on Mobile Healthcare will Contribute to Growth in Global Telehealth

The global telehealth market is expected to grow at a CAGR of almost 19% from 2015 to 2019, thanks to demand for high-quality healthcare and remote patient monitoring, according to research firm TechNavio.

While all major players in the market are focusing on R&D to launch innovative products and services, there is also a sense of urgency among vendors regarding the need to improve bandwidth to enhance the reach of mobile health.

“Vendors are focusing on expanding the global mobile health market by working in partnership with the telecom and healthcare sectors," says Faisal Ghaus, VP of TechNavio.

Key players in the market are focusing on removing cost pressures by reducing fragmentation among healthcare and network providers. They are taking keen interest in developing common guidelines for telehealth services while driving innovation.

“In addition, mobile connectivity is expected to emerge as one of the main advantages in telehealth, to be deployed for remote monitoring, medicine compliance, and assisted living facilities for connected patients." (PV)