The Irish pharmaceutical market has grown exponentially over the past 50 years thanks to a skilled talent pool, trusted environment, and good government incentives.

The Republic of Ireland, a country of about 4.7 million people, is a member of the European Union and today ranks as one of the wealthiest countries in the world in terms of gross domestic product. During a boom period — from 1995 until 2007 — the country became known as the Celtic Tiger. A financial crisis in 2008, alongside the global economic crash, halted the country’s seismic growth. 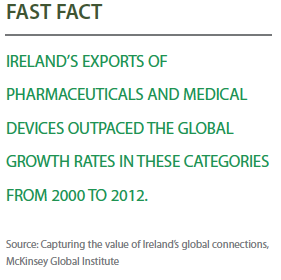 Ireland is now well and truly emerging from the chronic economic recession, which necessitated a rescue program from the IMF and consequently deep expenditure cuts and tax increases, according to the Irish Pharmaceutical Healthcare Association (IPHA).

In November 2014, the European Commission upgraded its growth projections for Ireland, estimating gross domestic product would grow by 3.6% in 2015, an improvement on the 3% it had projected six months earlier.

There are many factors that draw pharmaceutical companies to the Irish market, including its reputation as a 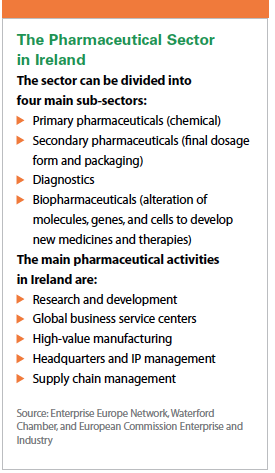 high-quality manufacturing site, a skilled and highly-qualified workforce — the OECD has rated Ireland as third in the world for availability of skilled people — and a number of government incentives. Among these, PwC notes, are: a low effective tax rate, an R&D tax credit that gives 25% on incremental expenditures, R&D tax credits that can be amortized against costs; an IP regime that provides tax deductions for expenditures on qualifying IPs; and double taxation agreements with 73 countries.

According to PwC, Ireland has a track record as a supply chain hub and acts as a regional hub for several major life-sciences companies.

Companies in Ireland have incorporated the latest technology, equipment, and strict control procedures, making it a highly sophisticated market.

Nevertheless, the life-sciences industry does not have a long history in Ireland, with few companies having been in the country before the 1960s. In 1973, the pharma sector employed fewer than 2,000 people in Ireland and had a turnover of less than 100 million  Euros per annum ($113.2 million). Today, however more than 24,000 people are directly employed in the Irish pharma industry, with a similar number providing services to it.

One of the first global pharmaceutical companies to locate to Ireland was Pfizer, which established a division in the country in 1969. Today, the company employs more than 4,000 people in Ireland across eight locations, and Ireland is a leading manufacturing base for the company globally.

Pharma companies are continuing to expand their presence in the country. In September of last year, Lilly launched a large recruitment drive to fill 100 jobs in Ireland. Lilly has been in the country for more than 30 years and has four Irish operations. Lilly’s recruitment drive follows similar ones by Regeneron, which created 300 new jobs in Limerick, and Alexion Pharmaceuticals, which added 200 jobs in Dublin.

However, McKinsey cautions that while the country has a powerful track record for attracting leading companies in the pharmaceutical and technology industries, it is vulnerable to volatile global flows. To thrive going forward, McKinsey suggests the country needs to do more to shore up its weaknesses and bolster its strengths.

Among its weaknesses, McKinsey notes, are that few Irish companies scale up and compete globally, and that those that do focus on traditional markets.

The healthcare sector is experiencing an easing of recent cuts. Having experienced a steady increase in funding during the 2002 to 2007 period, the health sector bore the brunt of reductions, with more than 2 billion being taken off the budget, the IPHA says.

After the 2011 general election, the new government continued to cut the health budget, while signalling major structural reforms. Among these were a plan to abolish the Health Services Executive (HSE), which runs all the public health services in Ireland, and the introduction of universal health insurance. But according to the IPHA, after a cabinet reshuffle in July 2014, a new Minister for Health was appointed and these two major aspects of planned reform appear to have been quietly shelved.

For the first time in six years the Minister secured a modest increase in the health budget for 2015 (305 million), bringing total spending to just more than 13 billion. Despite the budget cuts of recent years, health services have experienced some significant successes. These include a significant improvement in cancer services nationally and a continuing increase in life expectancy, which is now above the European average, the IPHA notes.

In addition, the IPHA says between 2007 and 2015 the research-based pharmaceutical industry will have delivered more than 1.2 billion in savings. This is a result of a series of framework agreements between the state and the IPHA that determine the terms and conditions under which medicines are supplied to the Irish healthcare service. In Ireland, once a generic medicine enters the market, the branded product drops to 70% of its original price, and then to 50% a year later.

In addition to this, significant savings are now accruing to the state through reference pricing legislation, which was enacted in 2013. Under this agreement, new medicines in Ireland are priced at the average of a “basket" of nine European countries: Austria, Belgium, Denmark, Finland, France, Germany, Netherlands, Spain, and the United Kingdom.

A spokesman for IPHA says the research-based pharmaceutical industry will be working with the state to ensure that a workable successor agreement is put in place by the time the current agreement lapses in 2015 to ensure patients in Ireland have timely access to the most innovative of medicines. 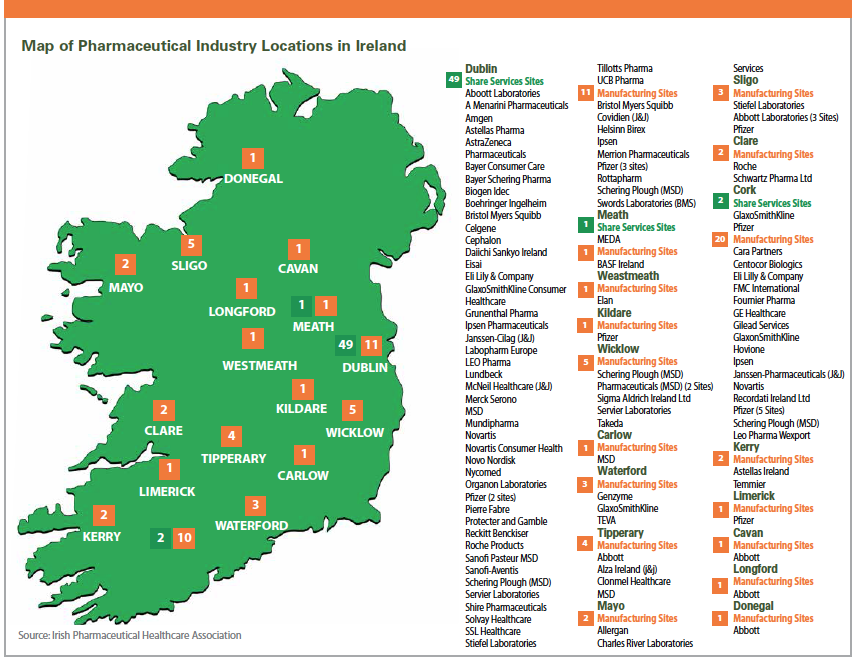 According to the IPHA, pharmaceutical companies with divisions in Ireland tend to conduct Phase II, III, and IV clinical trials in the country. Member companies register ongoing clinical trials and results of completed clinical trials on the World Health Organisation (WHO) International Clinical Trials Registry Platform (ICTRP) and, for many of the larger companies, on their own company websites.

Before authorization to conduct a clinical trial is granted, an application with supporting medical and scientific data must be submitted to the Health Products Regulatory Authority (HPRA) for review. These data are then reviewed by the HPRA to determine whether the drug is scientifically valid and properly researched at the preclinical trial stage. 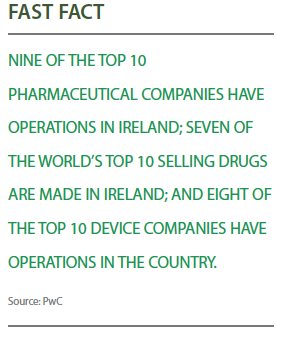 An IPHA spokesman says companies must also obtain a positive opinion from an Ethics Committee, which is independent of the pharmaceutical industry and is established and supervised by the Department of Health. These Ethics Committees can reject a clinical trial on ethical grounds.

The clinical trial must also be conducted in accordance with good clinical practice, which involves a set of detailed ethical and scientific quality requirements for designing, conducting, performing, monitoring, auditing, recording, analyzing, and reporting clinical trials. These requirements ensure that the rights, safety, and well-being of subjects are protected, and that the data generated in the trial are reliable and robust.

Only after this process has been completed can a new medicine be submitted to the relevant regulatory authority for approval for use in the treatment of humans.

“The good thing here in Ireland is that the system is getting better," a spokesman for IPHA says. “The UK system is very rigid, maybe too much so. The Irish system is definitely moving in the right direction."  (PV)

View all | Post a press release
Industry Dive publications win 6 National Gold Azbees – most of any publisher
From Industry Dive
Vivera Partners with NINDS of NIH to Identify Potential Stuttering Treatments
From Vivera Pharmaceuticals, Inc.
Azzur Group Appoints Corporate Services Executive, Ray Jaffe, as Vice President of Operations,…
From Azzur Group
Read next
Latest in Commercialization
© 2022 Industry Dive. All rights reserved. | View our other publications | Privacy policy | Terms of use | Take down policy.
We use cookies to optimize your experience on our website and for analytics and advertising purposes. By continuing to use our site, you agree to our cookie policy. Learn more
Accept