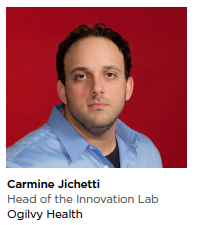 Before the Internet became the modern technological behemoth we know and cannot live without today, there sat a Coca-Cola vending machine at Carnegie Mellon University in Pittsburgh, Pennsylvania.
Back in 1982, David Nichols, a computer science graduate student grew ever-so tired of making the trek from his office to the Coca-Cola machine only to find it empty. Realizing the technology available to him, Nichols reached out to a few fellow students and presented them with the challenge of figuring out how to monitor the vending machine remotely.
And, in true grad school fashion, they would use the newest and most expensive technology available at the time to accomplish the goal of not being disappointed with an empty vending machine. Utilizing the department’s main computer and its connectivity to what was known as ARPANET — today’s Internet predecessor — which was only connecting around 300 computers, they wrote a program that would successfully check the status of the vending machine. However, it wasn’t until code was added to the main computer, allowing anyone on a computer connected to Carnegie Mellon’s local network to access information about the machine, did it technically become the world’s first IoT device.
However, calling it that at the time wasn’t an option, as the IoT moniker wouldn’t come about until 1999. British high-tech entrepreneur, Kevin Ashton, who was part of a team that discovered how to link objects to the internet through an RFID tag, coined the phrase “Internet of Things" in a presentation.

So, why the history lesson? Well, the IoT has the potential to be life-altering. It has the ability to completely transform the way we live in virtually every aspect imaginable. It was unknowingly started by a few grad school students who did it because … why not? A simple solution to a minor inconvenience has matured into more than just a technology solution — it’s a concept. It is about seamless collaboration of many technologies that when networked together will help drive solutions to 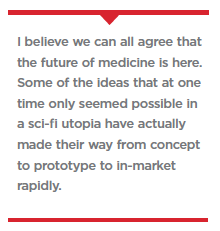 problems far greater than coming back empty handed from a vending machine. Just as amazing is the exponential growth of the IoT. The year 1999 might have been the point at which it was given a name, but the first real evidence of the widespread adoption was in the late 2000s and early 2010s, when newer Internet protocols and smaller sensors were introduced. In the early 2000s, Cisco Systems estimates that there were .08 IoT devices per person. In 2010, that ratio jumped to 1.84 devices per person. Now, it is estimated that there will be between 25 to 30 billion connected devices by the end of 2020 with more than 75 billion anticipated by the year 2025. That estimate puts the ratio at 9.2 devices per person. That’s a lot of “things." And, quite honestly, especially in the healthcare industry, I don’t think we fully recognize just how big this can get.

The Future of Medicine is Here

I believe we can all agree that the future of medicine is here. Some of the ideas that at one time only seemed possible in a sci-fi utopia have actually made their way from concept to prototype to in-market rapidly.
Furthermore, today the healthcare sector is completely artificial intelligence (AI)-enabled. AI has the potential to impact all aspects of healthcare — diagnostics, treatment, patient care, even disease prevention. And what drives artificial intelligence? Data — big data. What has the ability to bring in big data? Cost-affordable and, in some cases, payer-provided smart devices equipped with the newest sensor technologies.

Having been responsible for conceiving and building functional prototypes and the systems (compliant with the Health Insurance Portability and Accountability Act, of course) to house and analyze the data the devices are gathering, I’ve seen firsthand the power of the IoT.
Aside from the technical benefits it brings, there is also enhanced patient experience. The passive nature of the data collection places less burden on the patient and yet yields a larger, more accurate data set. Also, being connected to a healthcare system through the IoT brings a more engaged patient into the treatment journey. Built on cloud-computing technologies that are scalable and data-gathering sensors for every biomarker imaginable, it is mobile, virtual, and immediate with no manual delays. As a result, patient outcomes improve because healthcare providers are working with real-time data to make informed treatment decisions.

The IoT has been hyped up for a few years now. I remember seeing it in presentations in the middle part of the last decade being touted as the next “big thing." But, like with many emerging technologies, a lot of the promotion is based on proof of concepts and promises of the future. The IoT is finally living up to its prophecy and there’s no doubt it will surpass what anyone thought it could be — especially the grad students looking for cold soda.(PV)

Ogilvy Health makes brands matter by keeping our audiences’ health, healthcare and wellness needs at the center of every touchpoint.
For more information, visit ogilvyhealth.com.