In February 2018, FDA Commissioner Scott Gottlieb, M.D., emphasized the agency’s commitment to advancing the development of novel treatments for neurological conditions. His statement recognized the uneven progress made in certain diseases and pinpointed the complex nature of neurological conditions. “The brain, in many respects, is the last organ system where many aspects of our understanding of the underlying biology of disease remain uncertain," Dr. Gottlieb noted. 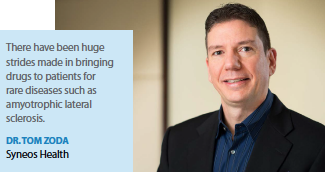 Diseases such as muscular dystrophies, amyotrophic lateral sclerosis, Alzheimer’s disease, migraine, and epilepsy are priorities for both the agency and many pharma and biotech companies. While breakthroughs have been harder to achieve, recent exciting developments in these and other conditions, such as depression, are showing significant promise.

Where the Promise Lies

Advances in functional neuroimaging are making it possible, for the first time, to evaluate how groups of neurons function together to better understand neuronal circuitry in health and in disease, rather than looking at individual neurons in a dish or even as groups of neurons as a static neuroimage, says Andrea Witt, Ph.D., executive director, CNS and ophthalmology disorders at Decision Resources Group (DRG).

“Understanding the miswiring of the central nervous system in greater detail — mis-wiring that occurs during development or during a disease — will have a deep impact on psychiatric diseases and neurodegenerative diseases such as schizophrenia or Alzheimer’s and Parkinson’s because it will provide critical clues into the pathophysiology of these diseases — their timing, their precise site of action, and the downstream effects of the disrupted neuronal signaling," she says.

“From a diagnosis perspective alone, these new modes of neuroimaging could provide us with data critical to differentiate a multitude of CNS disorders, for instance, mental disorders or pain, which often do not cluster out cleanly into individual diagnoses, but rather are spread along a spectrum," Dr. Witt adds. “If we

could eventually combine neuroimaging data with genetic expression profiling data, we could make considerable strides in identifying drug targets for CNS conditions and usher in an era of precision medicine in neurology, psychiatry, and pain."

Over the past 18 months, new CNS drugs have been approved for several indications, including Genentech’s Ocrevus for primary progressive and relapsing multiple sclerosis and Newron Pharmaceuticals’ Xadago to treat Parkinson’s disease.

Richard Scheyer, M.D., VP of medical affairs at Medpace, points to a breakthrough from Biogen with spinal muscular atrophy, a devastating neurodevelopmental disease.
“Spinraza, the first agent to treat SMA, was approved about 18 months ago," he says. “It must be administered by repeated lumbar punctures. Results for new oral agents, and for a gene therapy, are very encouraging."

Tom Zoda, Ph.D., executive VP and general manager, clinical development, CNS, Syneos Health, notes there have been huge strides in bringing drugs to patients for other rare diseases such as amyotrophic lateral sclerosis, with Radicava, and Duchenne’s muscular dystrophy, with Emflaza from PTC Therapeutics.

There have been exciting developments in epilepsy with the approval of Epidiolex, a plant-based cannabinoid pharmaceutical from GW Research, for Lennox-Gastaut syndrome and Dravet syndrome. These not only open the way for additional effective marijuana-derived medications to reach patients but also address a critical unmet need for children suffering from these disorders, says Carla Lema Tomé, Ph.D., therapeutic strategy lead, neuroscience, Worldwide Clinical Trials.

“Both Dravet and Lennox-Gastaut syndromes are rare forms of childhood epilepsy that lead to cognitive impairment and developmental problems and carry a high risk of mortality," Dr. Lema Tomé says. “Pharmacological interventions for these disorders have a small success rate and effectiveness is low. Epidiolex, an oral solution of cannabidiol, has delivered strong evidence of efficacy in treating both syndromes, demonstrating significant reduction in seizure — of up to 41% — with minimal side effects. In addition, a small percentage — 5% — of Dravet syndrome patients became seizure-free with Epidiolex."

She adds that the Drug Enforcement Administration will need to remove Epidiolex from the Schedule I list to a less restrictive schedule before it can be legally sold. 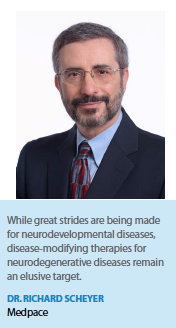 This change would inevitably shift the way in which the United States perceives marijuana-derived products for medicinal purposes.

Other promising developments for cannabis-based drugs are in treatment-resistant depression, with several therapies, such as esketamine and rapastinel, demonstrating rapid onset of action and efficacy.

DRG analysts expect these drugs to experience use among patients with major depressive disorder (MDD) who are at imminent risk of suicide and/or are treatment-resistant.

According to DRG’s research, about one-third of the MDD patients are treatment resistant.

“Increased focused on negative symptoms associated with schizophrenia, a deeply underserved part of the psychiatry market, and treatment resistant schizophrenia, has faced headwinds for drug development, but hopeful compounds are continuing to drive into this space," Dr. Zoda says.

Osteoarthritis pain is another area that is witnessing new developments aimed at improving safety and tolerability. In addition, there are two analgesics in Phase III trials in the anti-NGF (nerve growth factor) class.

The Challenge of Biotech in CNS

According to DRG analysts, the CNS market has tended to be the focus of small molecules, with biologics mostly in targets outside the CNS such as multiple sclerosis and migraine.

“The biologic approach has shown itself to be a difficult pathway for treatment of CNS diseases due to the necessity to cross the blood-brain barrier," Dr. Zoda says. “These molecules, predominantly antibody based, are often too large to actively penetrate the barrier and mediate effect upon intended targets. Even when modified to do so, the efficiency of such penetration is often limited and must be balanced with higher doses that could cause subsequent side effects."

Dr. Scheyer notes that a promising approach is to link molecules to substrates of blood brain barrier transport systems, adding that biologics using this approach have entered clinical trials.

Dr. Lema Tomé says among examples of strategies to overcome the blood-brain barrier are Roche’s Brain Shuttle technology to allow the delivery of monoclonal antibodies with fully functional bivalent immunoglobulin G (IgG) antigen binding; Denali’s antibody transport vehicle (ATV) system, which targets transferrin receptors on the luminal surfaces of vascular endothelial cells; ArmaGen’s platform technology, which fuses a therapeutic to an antibody that binds to the specific receptors that deliver insulin, transferrin, or LRP1 to the brain; or a number of nanoparticles technologies (such as Laurel Science’s V-Smart Nanomedicines) and viral vectors optimized for brain delivery.

“While great strides are being made for neurodevelopmental diseases, disease-modifying therapies for neurodegenerative diseases remain an elusive target," Dr. Scheyer says. “Nonclinical models are improving but remain problematic."

One biotech breakthrough came in May 2018 with Aimovig from Amgen and Novartis. Aimovig, an anti-CGRP antibody for the prevention of migraine, is the first monoclonal antibody in the pain space and the first therapy to launch that was developed specifically for migraine prevention, according to DRG. Multiple competing anti-CGRP monoclonal antibodies are poised to launch on the U.S. market in 2018 and 2019 and because of the improved efficacy and clean side-effect profile compared with generic oral therapies, at least three of these anti-CGRP monoclonal antibodies are forecasted to achieve blockbuster status.

Dr. Scheyer says biologics such as betaseron, for the treatment of multiple sclerosis, 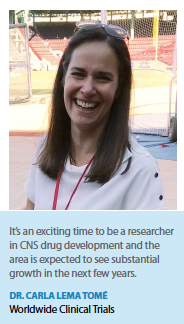 “Systemic antibodies such as aducanumab have recently been shown to be able to reduce brain deposits of amyloid, although demonstration of effects on Alzheimer’s itself remains to be established," he adds.

Despite current challenges, Dr. Zoda says biologic therapy remains an attractive way to pinpoint molecular targets with high-specificity, leading to the advent of other biologic approaches in gene therapy and stem cell treatment. Rare diseases such as SMA and DMD have demonstrated themselves to be prime indications for this type of intervention due to known correspondence to certain genetic loci accounting for the disease manifestation.

“Stem cell therapy, for such indications as Parkinson’s, stroke, and even traumatic brain injury, remain areas of investigation, and could yield novel approaches," Dr. Zoda says.

When it comes to rare neurological diseases access to patients can be limited. To accommodate this, there is a need for innovative study methodologies, Dr. Lema Tomé says.

“Adaptive designs are now vetted across a wide range of indications since they permit evaluation of more dosage levels in fewer patients and incorporate strategies that can shorten overall development time," she says. “However, the challenges of integrating design with clinical operations and overall regulatory and commercial strategy can be formidable, thus serving as a disincentive to the use."

One area that has struggled to achieve any breakthrough is treatment for dementia, with multiple drugs failing in the disease-modifying arena.

Dr. Zoda says recent failures have continued to confound this vital and ever-expanding healthcare problem particularly in Alzheimer’s and stroke.

“Much hope is being given to Biogen’s aducanumab anti-amyloid therapy and Eisai’s elenbecestat is still being viewed as hopeful for the BACE pathway of intervention in Alzheimer’s disease," he says. “Any positive achievement in AD will be heralded as the biggest CNS breakthrough of the last 20 years."

However, the advent of more defined biomarkers will enable CNS researchers to modify and shift their approaches to drug development.

“The elusive pursuit of true disease-modifying drugs will continue to be the holy grail of research across multiple indications, such as epilepsy, Alzheimer’s disease, Parkinson’s disease, and stroke," Dr. Zoda says. “However, as these diseases are multi-factorial, developing a magic bullet treatment will remain difficult and inherently complex. Cures — such as Zepatier, Mavyret, and Harvoni, drugs recently approved for hepatitis C — will still be the goal, but the approaches will need to be creative, and the clinical trials well-thought out."(PV)

Podcast
Woman of the Week: Novartis' Marie-France Tschudin
How the chief commercial officer and president of innovative medicines international plans to fuel growth and productivity at the company.