With a U.S. healthcare market estimated at $2.8 trillion and purchasing either made or largely influenced by women, the “power of the purse" has never been stronger.

According to Carolyn Buck Luce, executive-in-residence at the Center for Talent Innovation and an adjunct professor at Columbia University who teaches Women and Power, and co-founder of 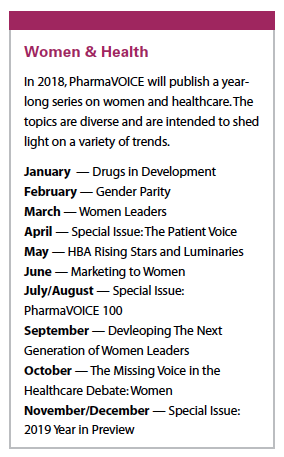 Imaginal Labs, women are the big spenders and are getting wealthy fast. The numbers are staggering. In the United States — with similar directional numbers in Europe — women account for the vast majority of all consumer purchases: 65% of new car purchases, 85% of healthcare expenditures, and 91% of new homes purchased.

U.S. women are also now the majority in the workforce. Close to 1 billion women are estimated to enter the workforce and marketplace in the next several decades in the developing world.

Ms. Buck Luce says these seismic economic and demographic shifts are referred to as the “SHEconomy" and illustrate the power of the purse of women as decision makers and influencers in many segments of the economy.

InvestSnips, which tracks dozens of industries and large-, medium- and small-cap companies, identified about 20 publicly traded companies — biotech, medical device, pharmaceutical, or other healthcare companies — that focus on providing products relating to women’s health. Included on the list are Agile Therapeutics, Boston Scientific, Sonoma Pharma, Quidel Corp. (To see the full list, please go to http://investsnips.com/publicly-traded-womens-health-care-device-companies.) Further illustrating the renewed wave of interest in women’s health is the $1.1 billion that has been raised by start-ups to help improve women’s healthcare, according to CBInsights. Company analysts say start-ups targeting women’s healthcare have multiplied in recent years, spurred in part by PayPal Co-founder Max Levchin’s launch of the fertility tracking app Glow in 2013, which saw early funding from high-profile VCs.

Additionally, many of the large pharma companies have units or divisions that focus on diseases that disproportionately affect women’s health. 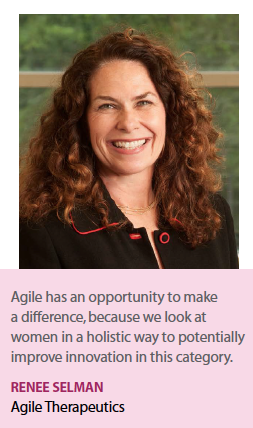 Gerianne DiPiano, chairman and CEO of FemmePharma, a privately held company whose sole focus is on women’s health, sees nothing but opportunity.

“Women are the largest demographic and the most powerful voice in the developed world," she says.

FemmePharma was founded with the mission to improve both the health and the quality of life of women through superior therapeutics targeted on conditions, disorders, and diseases that are unique to women, occur disproportionately in women, are associated with different risk factors in women than in men, follow a different course in women than in men, and are not adequately addressed by existing therapeutics due to their unpleasant side effects.

“Women are demanding equal access to safety, health, and opportunities for empowerment," Ms. DiPiano says. “This is why we continue to invest solely and exclusively in women’s health. We see this as a huge advantage. We’ve stayed the course because we understand the value of working with women. Most of the time, when folks look at the data they lose sight of the economic potential of investing in women and women’s health, which is significant both in the near and long term."

She is referring to statistics that demonstrate that women have control of 85% of overall spending in the United States, and make more than 70% of the healthcare spending decisions.

“If companies do not figure women prominently in their product development and other service offerings they are clearly missing the boat," Ms. DiPiano says. “And that’s why we truly see an opportunity and an advantage working solely and exclusively for women.

“We’ve look at how we can provide differentiation, which is part and parcel of the company’s DNA," she continues. “We look at the subtle differences in developing drugs in women’s healthcare and we are designing products that actually address women’s physiology quite differently."

FemmePharma will be launching a non-hormonal product to treat vaginal symptoms of menopause shortly — a product, Ms. DiPiano says, women have been waiting for.

FemmePharma wants to eliminate the quandary that many women live with in terms of having to decide whether they might be better off living with a condition than using a therapeutic that might compromise their overall quality of life.

In addition to fertility and reproductive conditions, which are typically associated with women’s health, there are many other diseases, such as post-menopausal osteoporosis, osteoarthritis, Alzheimer’s disease, depression, urinary incontinence, multiple sclerosis, etc., that disproportionately affect women compared with men. And, as Lorraine Fitzpatrick, M.D., medicine development lead, GlaxoSmithKline, explains in a video on the PhRMA website, often women exhibit different symptoms from men for the same disease. The most common example is a heart attack. When men have a heart attack they exhibit pain in the chest area, which radiates down the arm. Women, on the other hand, may have nausea, jaw pain, or another usual symptom.

According to PhRMA, there are currently 851 medicines for diseases that disproportionately affect American women in the pipeline, including:

139 for cancers affecting women, including 91 for breast cancer, 49 for ovarian cancer, and nine for cervical cancer
114 for arthritis/musculoskeletal disorders — about 46 million Americans have some type of arthritis or related condition, and 60% of them are female
64 for obstetric/gynecologic conditions
110 for autoimmune diseases, which strike women three times more than men
72 for depression and anxiety — almost twice as many women as men suffer from these disorders
83 for Alzheimer’s disease — two-thirds, or 3.4 million of the 5.4 million Americans living with Alzheimer’s today are women.
According to PhRMA, there is greater understanding about the difference between the sexes and their healthcare needs, and this knowledge is inspiring a continuing medical revolution that is bringing new hope to women around the world.

The Need to Change the Clinical Paradigm

Not that long ago, relatively speaking, clinical trials were only conducted with men. The assumption was that the approved medication would work on everyone the same way. Today, we know differently. 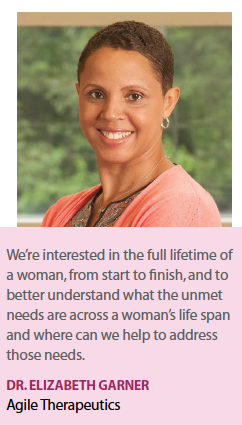 Although there are lifestyle, environmental, and behavioral differences, researchers know there are substantiated biological differences at the molecular and cellular levels between the two sexes, and these biological distinctions may contribute to the differences in clinical outcomes. Yet, women are under-represented in clinical trials, which in part is due to the physiology differences and the concerns related to women of child-bearing years. But another part of the issue is that clinical trials have not changed in how they are conducted. Many in the industry acknowledge that women are not always adequately enrolled nor is the data analyzed for sex-specific differences. As a result, these deficiencies have hindered the progress of understanding women’s response to medications. The good news is that U.S. agencies are working toward including more women in clinical trials and appropriately analyzing sex-specific data from clinical trials.

The OWH is an important move, but more needs to be done to continue this momentum.

Ms. DiPiano states that while many companies have historically claimed that they have an interest in women, they haven’t looked specifically and precisely at ways in which to design drugs that can be used by women. She says first drugs need to be elegant to use and second they need to significantly reduce the side effects that women experience.

“When we talk about women’s physiology, we often refer to it as paternal benevolence," she explains. “It’s a term that most of us who have been involved in developing drugs for women have paid attention to, and we’re not happy. We have to study drugs in women, we need to take necessary precautions, there’s no question about that, but this should not deter us from engaging women at all phases of their reproductive lives. Let’s face it, women’s bodies are constantly changing and it’s important to understand those physiological changes as women transition from puberty through menopause. It’s our obligation to design products that reflect those differences and to put in place ways to safeguard women who may be at different points in their reproductive lives. It’s challenging, but it’s absolutely essential that we do not allow paternal benevolence to enter the equation or we will never be able to develop drugs for women."

Elizabeth Garner, M.D., who is chief medical officer at Agile Therapeutics, one of the companies listed on InvestSnips’ list, believes understanding women’s physiology is one of the reasons research into women’s health lags behind other fields, such as cancer.

“There are some basic things that we just don’t understand yet about women’s bodies; for example, we still have no idea how labor starts," she says. “We still lack some basic understanding of some of the physiology and pathophysiology behind what happens to women across their lifetime. It’s very 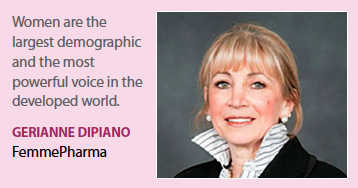 difficult to try to solve the problem if you don’t understand the problem to begin with. Another example is fibroids. We believe this to be a genetic disease. What if we could apply the same modeling that is happening in cancer, from a molecular standpoint, to figure out how to treat fibroids. We believe we need women to start having much more of a voice and talking about health and pushing companies to come up with solutions."

When discussing the complexity of clinical trials and the inclusion of women, Dr. Garner raises an interesting point. When she and her colleagues talk about Agile’s products they don’t speak about women as patients.

“Contraception isn’t a disease state," she says. “Neither is menopause, which is a natural aging condition, or its associated quality of life issues," she says, adding that the industry needs to think differently about how to design clinical trials and ways to include women and do no harm.

Agile’s lead product is Twirla, an investigational once-weekly prescription contraceptive patch. Twirla is a combined hormonal contraceptive, or CHC, patch that contains the active ingredients ethinyl estradiol, or EE, which is a synthetic estrogen, and levonorgestrel, or LNG, which is a type of progestin, a synthetic steroid hormone, both of which have an established history of efficacy and safety in currently marketed combination low-dose, oral contraceptives.

Some might think that the birth control market is saturated, but according to Agile’s Chief Commercial Officer Renee Selman this couldn’t be further from the truth. She challenges detractors to consider the sheer number of women in the United States, not to mention the world, who spend 30 years of their life on average trying to figure out how to plan pregnancy.

“Our belief is any new option is going to be substantial," she says.

“We definitely view ourselves as a women’s healthcare company," Dr. Garner says. “We’re interested in the full lifetime of a woman, from start to finish, and to better understand what the unmet needs are across a woman’s life span and where can we help to address those needs. That’s really our passion and our focus."

Ms. Selman adds that while Agile’s view is on women’s health, there is dissatisfaction with the pace of innovation in the categories of women’s health.

“Agile has an opportunity to make a difference, because we look at women in a holistic way, to potentially improve innovation in this category," she says.

In 2018, PharmaVOICE will publish a year-long series on women and healthcare. The topics are diverse and are intended to shed light on a variety of trends. 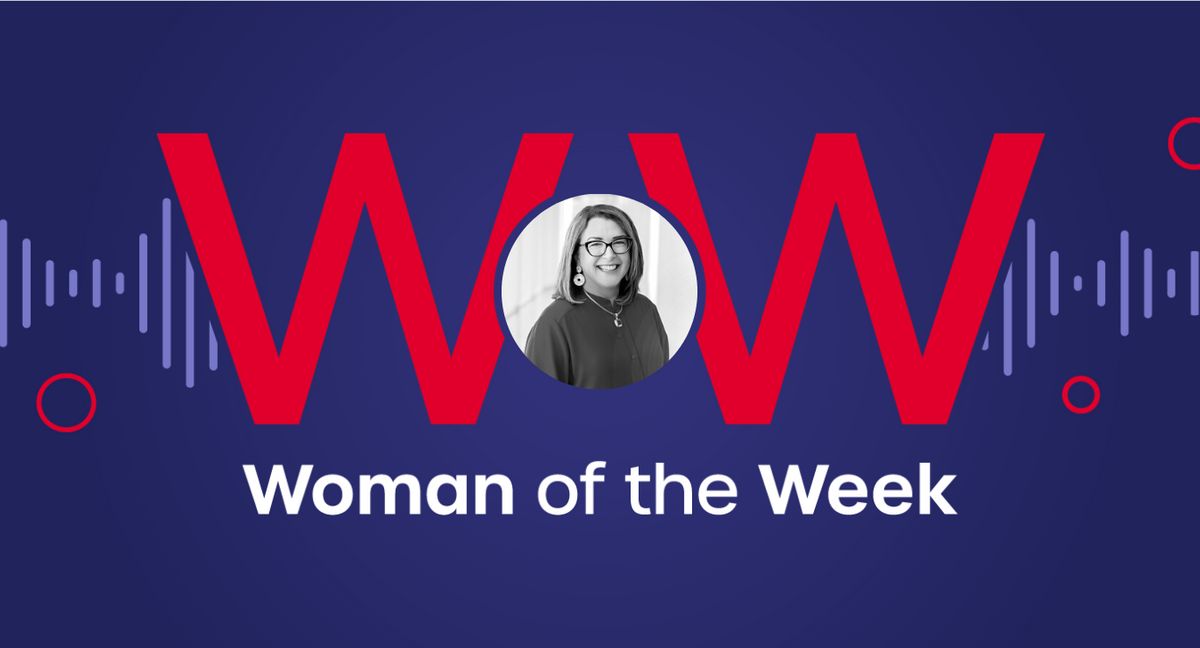 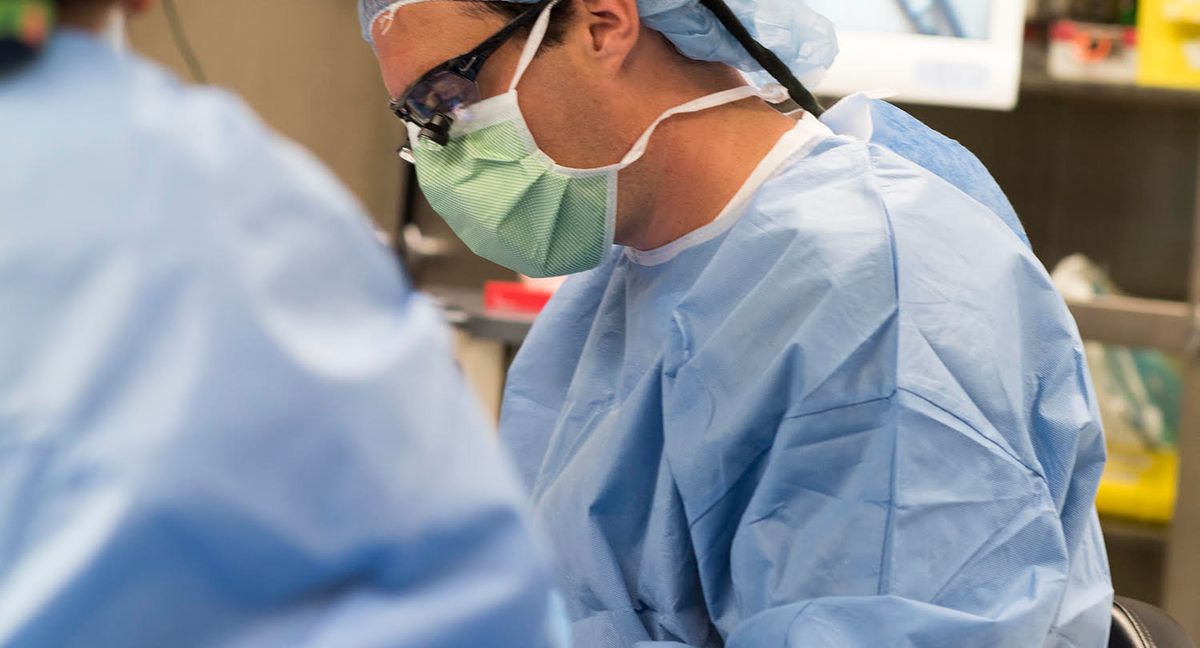