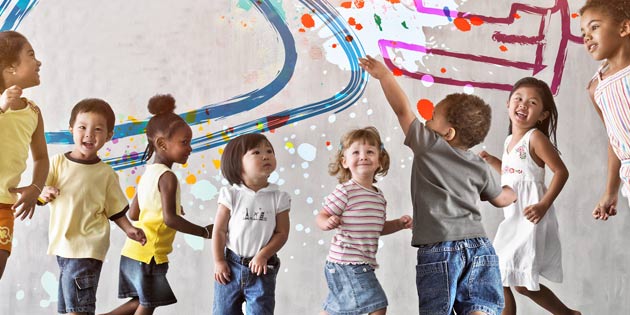 On the last day in February, hundreds of patients’ groups from around the world will hold a host of activities to raise awareness about rare diseases. The international 10th annual Rare Disease Day, which is coordinated by the European Organization for Rare Diseases (EURORDIS), seeks to help the public understand how rare diseases impact people’s lives, and bring these diseases to the attention of policy makers, public authorities, industry representatives, researchers, and health professionals.

“Rare Disease Day promotes education and awareness by sharing the everyday experiences of the millions of people living with rare diseases," says Mary Dunkle, VP of educational initiatives at NORD.

“Having a special day draws the community together and provides a unique opportunity to focus on goals we hold in common. It assures that, at least once a year, rare diseases and the challenges of living with a rare disease will be a topic of worldwide 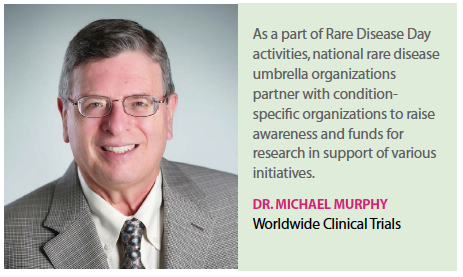 Diagnoses for rare diseases frequently are elusive even when genetically based; definitive therapeutic options are nonexistent for more than 95% of rare diseases, and symptomatic therapy, including support services may have limited utility, says Michael Murphy, M.D., Ph.D., chief medical and scientific officer, Worldwide Clinical Trials.

There are rare diseases that affect just one in 8 million people, such as Hutchinson-Gilford Progeria, which results in a rapid appearance of aging. One rare disease, Fields’ disease, which results in muscular deterioration, is believed to only affect twins Catherine and Kirstie Fields from Wales. At the other end of the scale, conditions such as Brugada Syndrome – a heart arrhythmia – affect as many as five in 10,000 people.

But while each rare disease affects just a small number of patients, it has been estimated that if all patients with rare diseases lived in one country, it would be the third most populous country on earth.

Rare Disease Day 2017 is focused on advocating for more research into rare diseases, and represents an important opportunity to spread awareness about a wide range of conditions.

“Rare Disease Day provides a foundation to highlight the importance of patient and caregiver involvement, a public policy that facilitates R&D with brisk product approvals, and emphasizes the need for coordinated research and development efforts across a spectrum of disorders and stakeholders," Dr. Murphy says. “Additionally, Rare Disease Day is a day of recognition, an occasion for those who work in policy, discovery, and clinical research to acknowledge an increasingly permissive scientific and regulatory environment supporting R&D initiatives."

Ms. Dunkle says the focus on research is particularly appropriate because major advances are being made in the understanding of rare diseases and development of diagnostics and treatments.

“Many academic institutions and pharmaceutical companies are establishing special centers to focus on rare diseases or orphan products," she says. “Approximately one-third of the new treatments approved by the FDA in recent years have been for rare diseases." 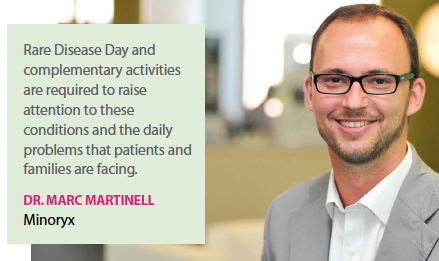 Patient organizations are more involved in research than ever before, both as sources of funding and as active participants. They are providing input into the design of studies and developing patient registries and other critically important resources, Ms. Dunkle points out.

“This is a time of great hope for the community, and innovative research is one of the primary drivers of that hope," she says.

Importantly, Rare Disease Day is a way to connect with patients and to hear their stories. Ms. Dunkle says the touching and compelling stories and photos that people with rare diseases share inspire action.

“Many of the individuals and families affected by rare diseases do truly remarkable things to overcome the challenges, both for themselves and others," she says. “It’s inspiring to read their stories and view their videos."

The word “rare" suggests to people that these are diseases that apply to other people and not them, but viewing first-hand the patient struggles, people can see that anyone can be affected and everyone knows someone with a rare disease, Ms. Dunkle says.

“These are just ordinary, everyday people coping with incredibly difficult situations and — in many cases — accomplishing amazing things in the process," she says.

Dr. Murphy notes that orphan disease research increasingly is characterized by a sophisticated understanding of genotypic and phenotypic relationships, evaluates exceptionally innovative therapeutic strategies that were well outside of feasibility less than a decade ago, and enjoys unprecedented regulatory flexibility in evidentiary standards of efficacy and safety offering accelerated development timelines and patient access.

“Indeed, activities supported by Rare Disease Day remind all that therapeutic solutions will be constrained only by the creativity, passion and support provided to R&D specialists within the industry and by the talent that can be demonstrated by organizations in mobilizing patient-centered research teams," he says.

Focus for the Day

NORD will have representatives in nearly every state at a broad range of advocacy, educational, and awareness events. A NORD 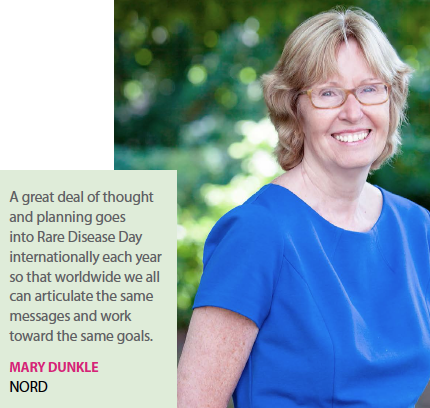 representative will speak at the National Institutes of Health (NIH) Rare Disease Day event, which is one of the signature events each year, Ms. Dunkle says.

NORD hosts the national website for Rare Disease Day in the United States (www.rarediseaseday.us), where people can post information about events they are organizing or find out what’s happening in their state. The “Handprints Across America" campaign and other activities on this website make it possible for everyone to participate in Rare Disease Day, even if they can’t travel to events.

“For Rare Disease Day 2016, NORD and advocates in its Rare Action Network (RAN) organized ‘State House Events’ in 37 states to educate and inform legislators," Ms. Dunkle says. “On the state level, more than 2,100 people participated in the state house events organized by NORD and its RAN advocates in 2016. This included 279 state legislators and legislative staff. Being able to discuss specific issues related to patient care, access, and support within states is incredibly important, and Rare Disease Day provides a perfect forum for this. Even more such events are being planned for this year."

NORD also works with students and staff at medical schools, universities, and teaching hospitals to organize Rare Disease Day events. Speakers from NORD’s patient/caregiver speakers’ bureau will share their experiences at many of these.

Many biopharmaceutical companies focused on rare diseases will be participating in activities to promote Rare Disease Day.

“We have seen a significant change around the awareness on rare diseases within the general population, and Rare Disease Day has been an important contributor to that," says Marc Martinell, Ph.D., CEO of Minoryx, which exclusively focuses on developing new therapies for rare diseases. “Nonetheless, there is still a lot of work to be done, so many other Rare Disease Day and complementary activities are still required to raise attention to these conditions and the daily problems that patients and families are facing."

“Last year this included the activities organized for Rare Disease Day as well as sport activities open to the public," Dr. Martinell says.

Minoryx’s lead program is targeting X-linked Adrenoleukodystrophy (X-ALD), which mainly affects the nervous system and adrenal glands, and its drug candidate MIN-102 is a PPAR gamma agonist that is now completing Phase I clinical trials. A Phase II/III trial in X-ALD patients with AMN is scheduled to start by the first half of 2017. The company also has a drug discovery platform to identify a new generation of pharmacological chaperones non-competitive with the natural substrate that it is applying to several lysosomal storage diseases.

Spreading awareness through events such as Rare Disease Day can serve as a powerful motivation for patients with rare diseases to enroll into clinical studies that could potentially result in more effective treatments, says Gur Roshwalb, M.D., CEO of Akari Therapeutics. 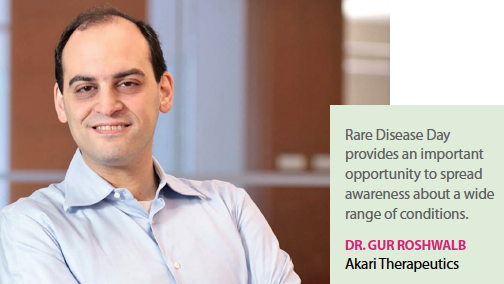 specific organizations to raise awareness and funds for research in support of these initiatives. In 2016, as an example, events on Rare Disease Day occurred in 85 countries and regions (all 28 EU countries as an example) with a companion video in 34 languages with more than 300,000 views recorded, 36,000 tweets, and 6 million Facebook contacts.

“Promoting awareness, providing a platform for funding, and providing a framework for proactive patient and family engagement in a participatory research model is foundational to a successful research and development stratagem," he says.

Worldwide Clinical Trials has a strong focus on rare diseases, providing it with a strong differentiation and allowing the company to provide integrated programs from IND activities to early and later phases of clinical studies, and to potentially pivotal trials. Other initiatives include webinars on a variety of topics to support orphan disease clinical research.

“For Rare Disease Day 2017, a Worldwide webinar will highlight the importance of integrated systems and teams within a CRO for difficult-to-find and difficult-to-treat patients,  a narrative that again emphasizes facility with innovative trial design applicable to small populations, international operational acumen distinctively different from those used within traditional indications, and patient engagement and retention mechanisms impacting protocol design and execution," Dr. Murphy says. (PV) 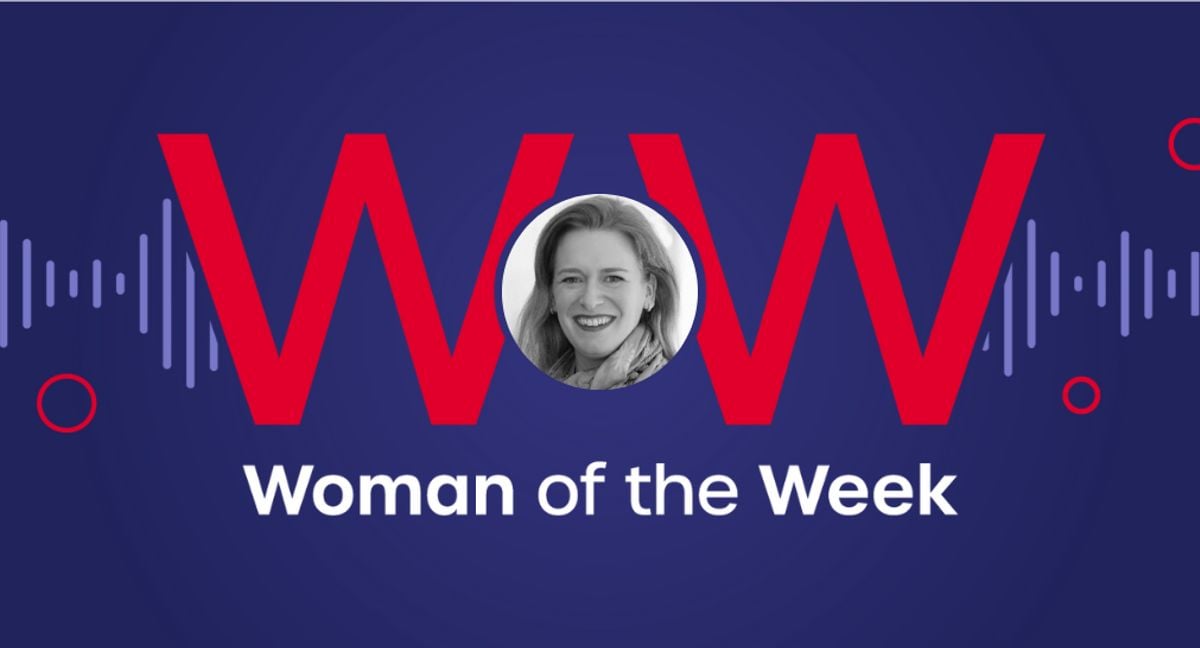 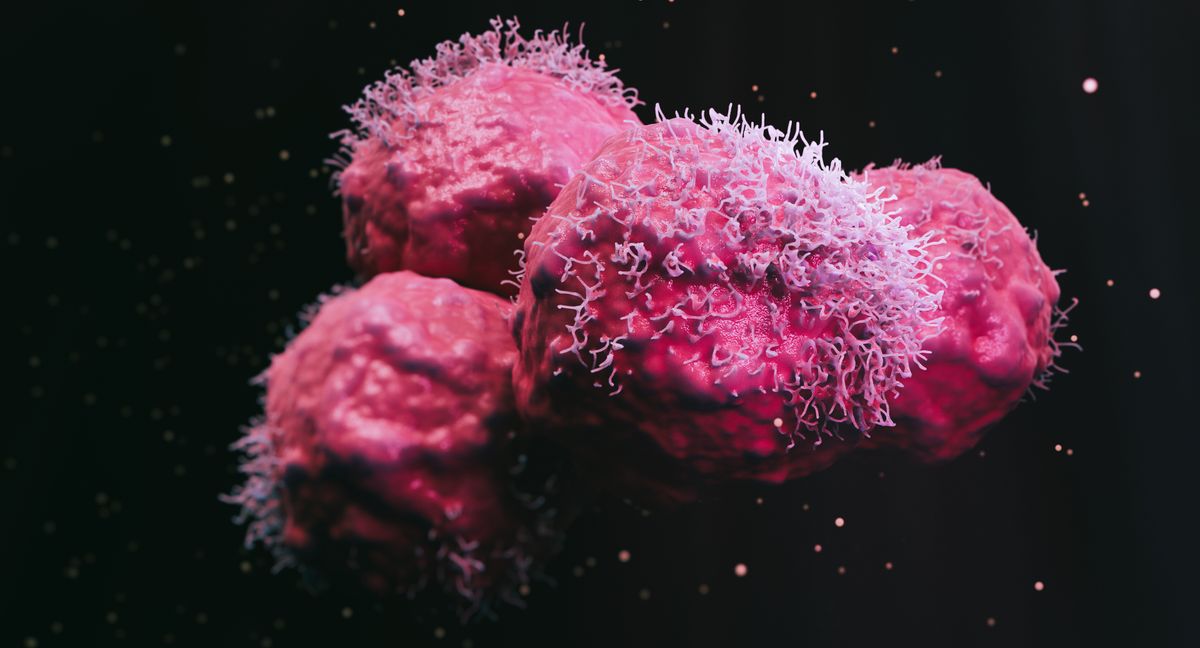 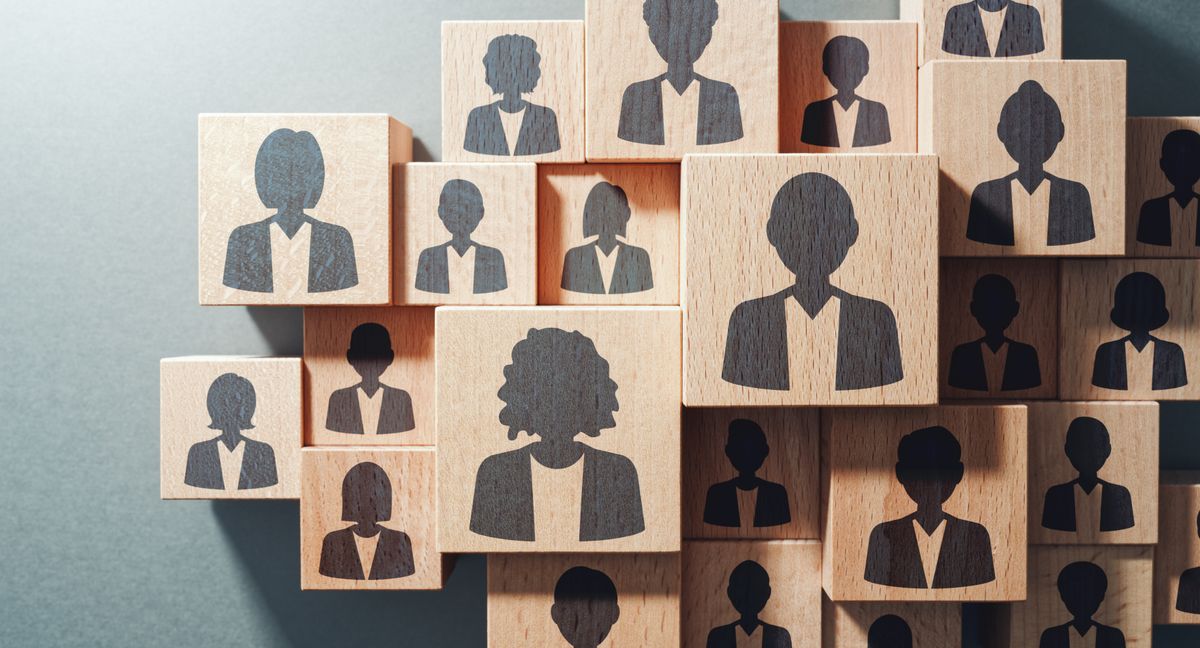 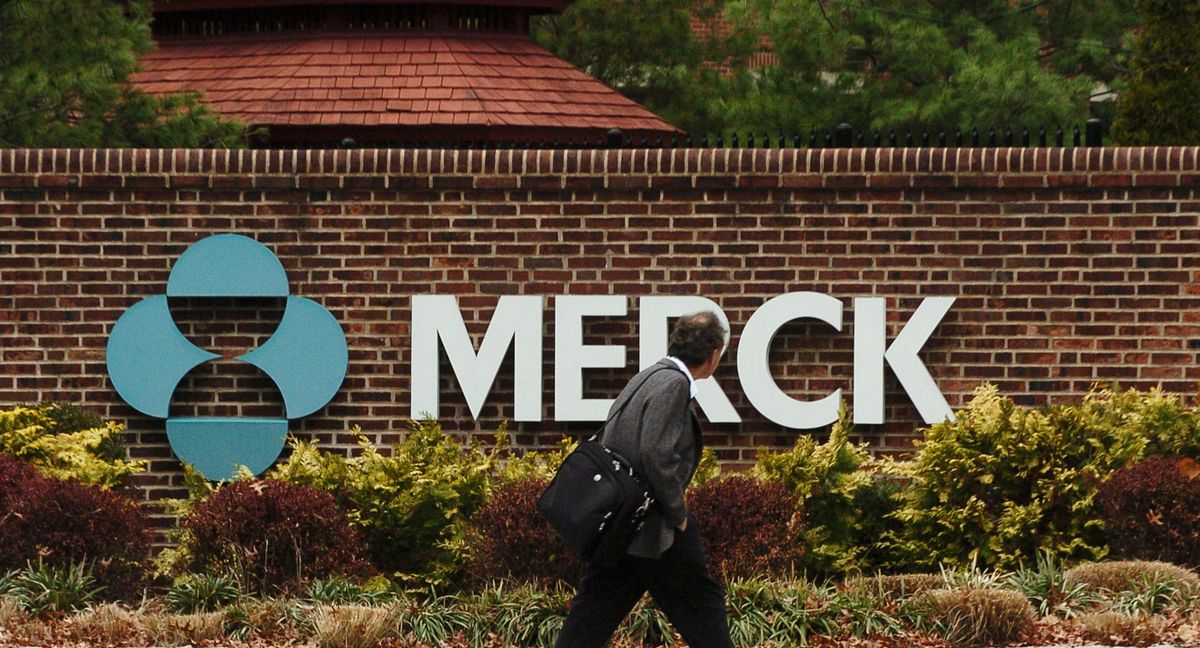 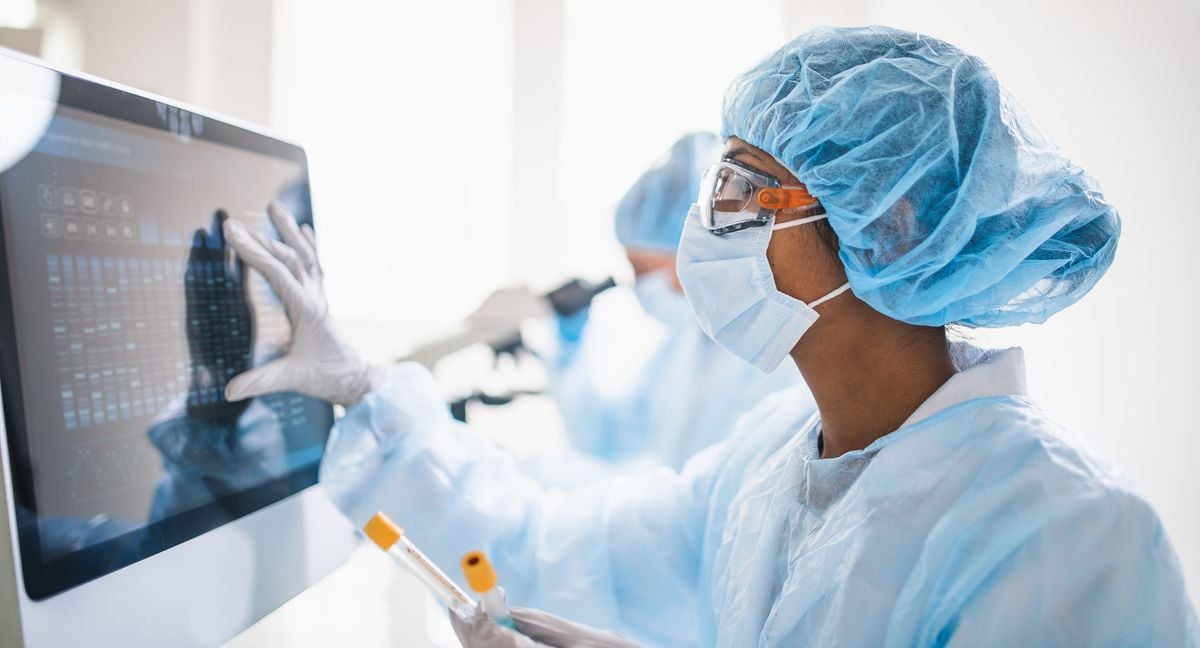 View all | Post a press release
Vivera Calls for Better Solutions Amidst $1.5 Trillion Opioid Addiction Crisis Economic Burden
From Vivera Pharmaceuticals
Azzur Group is Great Place to Work-Certified™ for the Second Year in a Row
From Azzur Group LLC
Vivera Receives 3rd Patent for ZICOH, Expanding Into $500B Prescription Market
From Vivera Pharmaceuticals
PharmaVoice names ‘Red Jacket’ honorees at virtual event
From Industry Dive
Read next
Latest in Research & Development
© 2022 Industry Dive. All rights reserved. | View our other publications | Privacy policy | Terms of use | Take down policy.
Cookie Preferences / Do Not Sell