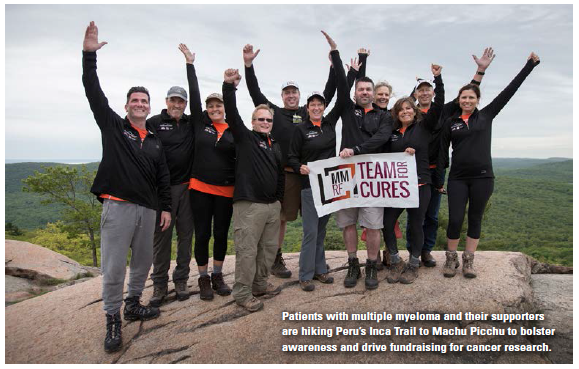 A team of 20 multiple myeloma patients, caregivers, physicians, nurses, and supporters hiked along Peru’s arduous Inca Trail leading to the ruins of Machu Picchu to raise funds for research and to build awareness around the incurable blood cancer. The Inca Trail trek is the third event for Moving Mountains for Multiple Myeloma (MM4MM), a collaboration between the Multiple Myeloma Research Foundation (MMRF), CURE Media Group, and Takeda that has raised nearly $500,000 to date for critically needed myeloma research.

Takeda Pharmaceuticals and the Crohn’s & Colitis Foundation of America launched an international inflammatory bowel disease (IBD) awareness campaign. The centerpiece of the campaign is the Super Hero Samarium, which highlights the strength and resilience of the IBD community, encourages people with Crohn’s disease (CD) or ulcerative colitis (UC) — the two most common types of IBD — to embrace their inner Super Heroes, and empowers patients to have honest and open conversations with their healthcare providers.

Every year, about 70,000 people in the United States are diagnosed with IBD. For the people who have to manage this chronic disease, day-to-day commitments like going to work or carrying on with everyday activities may be challenging. In addition to what can be painful physical symptoms, people with CD or UC can oftentimes feel alone in their experiences; lack of public awareness and perceived stigma surrounding IBD may cause many patients to mask their disease by isolating themselves.(PV)

CommonHealth Worldwide Executive Receives Leadership Award
Ogilvy CommonHealth Worldwide, the health behavior change specialists of Ogilvy & Mather, and a WPP company, have announced that Johanna Skilling, executive VP, director of planning in the US, has received the Leadership Award from the PVBLIC Foundation, an innovative nonprofit media organization that harnesses the power of media to drive social change.

ICON and Pfizer won the award for their achievements in 2015 on two ongoing parallel cardiovascular outcome studies, which will involve about 26,000 patients at 3,000 sites in 35 countries.

eBook
Enhancing the Patient Experience Through mHealth – a Win-Win
Provided by: BBK Worldwide

Overcoming the Business Challenges of Rare Diseases
Provided by: TrialCard