On April 29, 2016, Nuplazid (pimavanserin) became the first drug approved by the FDA for the treatment of hallucinations and delusions associated with Parkinson’s disease (PD) psychosis. Its journey from molecule to market took Acadia Pharma 17 years to complete. The company is now preparing for its commercial launch in the United States.

To begin the launch process, in January 2015 Acadia initiated a broad campaign to raise awareness in the medical community around PD psychosis and the challenges patients face. Efforts included educating physicians who treat PD psychosis patients through live and online education programs, presence at medical conferences, print and digital media pieces, and the establishment of the physicians-only website PDPsychosis.com.

The company has on-boarded 133 neuroscience field specialists who will play an important role in raising the awareness of Parkinson’s psychosis and the potential benefits of Nuplazid. 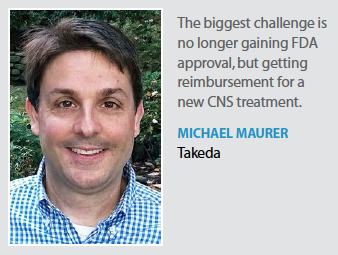 For patients, the company created NUPLAZIDconnect, a comprehensive program that provides access assistance to patients, their caregivers and physicians, along with financial aid to qualifying patients in need.

Starting in the United States, Acadia created a specialty salesforce focused primarily on physicians who treat PDP patients, including neurologists, psychiatrists, and long-term care physicians. For commercialization outside of the United States, the company may look toward establishing one or more strategic alliances with other companies.

This strategy, as reported by the company, follows the emerging trend in both CNS research and commercialization of focusing more on specialty diseases with high unmet need than CNS blockbusters, such as Prozac.

Takeda, which currently has three CNS treatments on the market — Rozerem (ramelteon) for insomnia, Reminyl (galantamine hydrobromide) for Alzheimer’s-type dementia, and Trintellix (vortioxetine) for major depressive disorder — has a foot in both camps; while it actively pursues drug development for Alzheimer’s disease, it is also exploring innovative therapies for underserved populations.

“At Takeda we’re targeting populations or subpopulations of high unmet need and this is a trend I see throughout the industry and particularly in the CNS therapeutic category," says Michael Maurer, VP, specialty medicines commercial leader, Takeda. “As the science is evolving, the industry is going after some fairly large disease areas such as Alzheimer’s, so there will be an emergence of disease modifying therapies that potentially can make a big difference in the lives of patients who are suffering with Alzheimer’s disease, but then there’s also a new path for pursuing rare diseases or smaller disease states where the science intersects with that need."

The science behind these rare disease therapies is exciting, but commercializing specialty products is challenging.

Being able to show the value of an expensive specialty product and how it differs from other products — some generic — already on the market is a tall order, and needs to be done strategically from the outset.

According to Drew Desjardins, executive VP, chief strategy officer at Dudnyk, the primary reason HCPs are closing their doors to sales reps is that they don’t see value in what is being offered. He says when sales representatives do get an opportunity to interact with physicians, the information they deliver must be highly scientific, relevant, and solution-oriented. It’s not enough to just provide product information; the new environment demands a consultative approach and that means reps must really understand the customer’s challenges.

“As access to specialty physicians becomes increasingly more difficult, it is more important than ever to nail the brand’s value proposition and to be able to communicate it in a manner that is relevant," Mr. Desjardin says. “While there are different ways to approach this issue, introducing a new CNS drug presents several unique challenges."

For example, not only are the drugs extremely complex with a mechanism of action that may not be well characterized, the audiences are among the most sophisticated healthcare professionals, so the brand’s value must be framed in highly scientific terms, Mr. Desjardins says.

Also, the patient condition or burden of disease may not be fully appreciated by healthcare professionals or easily articulated by patients. It can be very difficult to effectively illustrate value under these conditions.

To further complicate matters, the approach depends on which side of the CNS market the specialty physician is on. There are two distinct markets: one, traditional neurology diseases such as multiple sclerosis and Parkinson’s disease, and two neuropsychiatric diseases such as schizophrenia and depression, says Leslie Sandberg Orne, senior partner, at Trinity Partners.

“In the neurology space, clinical data, and specifically efficacy data, are king," she says. “These patients often have progressively debilitating disease, and their physicians are motivated by drugs that have demonstrated effectiveness in slowing progression and helping patients achieve a sense of normalcy."

However, in the psychiatric space, given the heterogeneity of the patient population and the “art" required to control the diseases, physicians are motivated by having many options that they can mix and match.

“To best approach physicians in these markets, companies are advised to identify the right patient for the drug and help physicians navigate this heterogeneity," Ms. Orne says.

“Demonstrating how a drug can effectively treat the underlying or root cause of the disease rather than symptoms can be a very powerful way to motivate specialists to try the drug," Mr. Desjardins says.

Research to support the approval of a new drug can often uncover insights into the mechanism of a disease. Reframing a problem and providing an explicit, perfectly matched solution is one of the oldest strategies in marketing, and it remains a highly effective approach when used for clinical advances with specialty physicians. 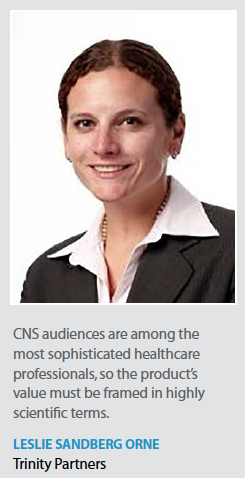 Mr. Desjardins also notes it is important to not overlook the patient in commercialization efforts of specialty therapies. Often when marketing a new drug to specialty physicians, marketers get caught up in trying to distinguish the brand based on product features like MOA, duration of effect, or formulation. This is understandably easy to do when the intent is to trigger interest for a “high-science" compound to a group of specialists. However, specialty physicians are intently focused on the best way to treat their patients.

“In a recent CNS product launch we were initially focused on the unique MOA of the client’s brand and its ability to address the root cause of the disease," Mr. Desjardins says. “Yet, we found that framing the patient condition in a way that HCPs previously had not thought of provided a new way for HCPs to interact with their patients, which provided greater opportunities for product usage."

Another factor driving CNS prescribing habits depends on whether the physician specializes in neurology or psychiatry, Ms. Orne says. For neurology, efficacy is key. Physicians will fight for reimbursement for drugs that they believe are the “best" for their patient. In psychiatry, given the number of generic products available today, price likely edges out efficacy in terms of driving prescribing habits for the majority of physicians.

The reimbursement process is another major stumbling block in terms of commercializing CNS therapies.

In CNS diseases, reimbursement is complicated due to the existence of many incumbent generic drugs that work well and have set the bar high for new products entering the market. Older products such as levodopa/carbidopa for Parkinson’s disease and many generic anti-epileptics for epilepsy are sufficient for many patients, and therefore most insurers will require patients try — or “step through" — these drugs before advancing to anything new, Ms. Orne says.

Moreover, many CNS patients suffer some degree of debilitation and may not be able or willing to pay for expensive drugs, making it difficult for physicians to prescribe the “latest and greatest" drugs to a wide swath of their patients.

Manufacturers traditionally place a lot of stock in their innovative science to provide the differentiation needed to succeed over other therapies, however, in today’s market, another factor must be considered: who will be paying for the drug once it gets to market.

“The real acceptance of the value of a medicine will be determined by the stakeholders who ultimately have to pay," Mr. Maurer says.  “And the stakeholders can be very different;  the insurance company, the government, or patients themselves. The biggest challenge is no longer filing an NDA or receiving FDA approval, it’s actually getting reimbursement."

“We start thinking about reimbursement by payers directly within R&D," he says. “I think a critical mindset of R&D teams today is to focus on the intersection of medicine and science and making the medicine commercially attractive and interesting."

In the future, this type of approach will become even more common, as the treatment of CNS diseases becomes more and more targeted.

“In the next five to 10 years, the treatment of CNS diseases will become more personalized and specific than ever," Ms. Orne says. “Research into the genetic causes and variations of core diseases, such as depression and epilepsy, will lead to more refined treatments that are ‘built for purpose’ in specific patient subtypes. A deeper understanding of the biology, and that many CNS  diseases are not uniform across patients, should lead to better outcomes for a wider swath of patients."

At Takeda, marketers and brand champions are preparing for a huge disruption in the commercial model, but at this time Mr. Maurer is not sure how this will impact the way the company communicates with clinicians, but notes the chances are good it will affect the way physicians can prescribe their medicines.

“Clearly, I think we need more targeted approaches," he says. “How this evolves might include payers becoming more involved based on strong evidence that helps guide treatment decisions; it’s going to be interesting to see the degree of prescribing freedom clinicians actually have in the future."

“It’s going to be critical that medical affairs colleagues are able to have a clinical discourse with clinicians, as the science is going to create a greater differentiation than a promotional share of voice will be able to achieve," he says. “Given the body of evidence and the type of clarity that clinicians are going to need, a medical background will be very important in the future for those calling on specialty physicians."

Despite the many hurdles, including the many failures of drugs in development for larger diseases such as Alzheimer’s for example, the CNS market is on track for a serious resurgence.

Fueled by an aging global population, and the many unmet needs in the specialty disease space, analysts project that the global market for CNS therapeutics will reach $129 billion by 2020.

Commercial strategies for these products will need to take into account reimbursement possibilities and companies will need to invest in building medical affairs relationships with physicians early on in development.

“Regardless of the commercial approach taken, it is important to remember that value must be stated in terms that are relevant to the customer," Mr. Desjardin says. “Only then, will physicians be willing to spend the time required to fully appreciate the brand." (PV)